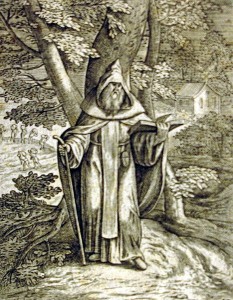 THE holy confessor Paphnutius was an Egyptian, and after having spent several years in the desert, under the direction of the great St. Antony, was made bishop in Upper Thebais. He was one of those confessors who, under the tyrant Maximin Daia, lost their right eye, and were afterward sent to work in the mines.

Peace being restored to the Church, Paphnutius returned to his flock. The Arian heresy being broached in Egypt, he was one of the most zealous in defending the Catholic faith, and for his eminent sanctity and the glorious title of confessor (or one who had confessed the Faith before the persecutors and under torments) was highly considered in the great Council of Nice. Constantine the Great, during the celebration of that synod, sometimes conferred privately with him in his palace, and never dismissed him without kissing respectfully the place which had once held the eye he had lost for the Faith.

St. Paphnutius remained always in a close union with St. Athanasius, and accompanied him to the Council of Tyre, in 335, where they found much the greater part of that assembly to be professed Arians. Seeing Maximus, Bishop of Jerusalem, among them, Paphnutius took him by the hand, led him out, and told him he could not see that any who bore the same marks as he in defence of the Faith should be seduced and imposed upon by persons who were resolved to oppress the most strenuous assertor of its fundamental article. We have no particular account of the death of St. Paphnutius, but his name stands in the Roman Martyrology on the 11th of September.

Reflection.—If to fight for our country be glorious, “it is likewise great glory to follow the Lord,” saith the Wise Man.