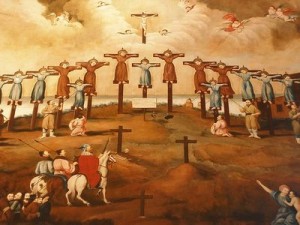 Paul Miki was born into a wealthy Japanese family in 1562. He was educated by the Jesuits, and joined the Society of Jesus as a Brother.  He became a well known and successful preacher, gaining numerous converts to Catholicism. The Japanese daimyo, Toyotomi Hideyoshi, fearful of the Jesuit’s influence and intentions began an anti-Catholic persecution.

Paul was jailed, along with others. He and his fellow Catholics were forced to march 600 miles from Kyoto to Nagasaki.  Along the way they sang the Te Deum. On arriving in Nagasaki, the city with the largest Catholic population in Japan, Miki was crucified on February 5, 1597.   Crucified longside him were Joan Soan (de Gotó) and Santiago Kisai, also of the Society of Jesus; along with twenty-three other clergy and laity, all of whom were canonized by Pope Pius IX in 1862.

St. Paul Miki preached his last sermon, from the cross, including the following:

The sentence of judgment says these men came to Japan from the Philippines, but I did not come from any other country. I am a true Japanese. The only reason for my being killed is that I have taught the doctrine of Christ.

I certainly did teach the doctrine of Christ. I thank God it is for this reason I die. I believe that I am telling only the truth before I die. I know you believe me and I want to say to you all once again: Ask Christ to help you to become happy. I obey Christ. After Christ’s example I forgive my persecutors. I do not hate them. I ask God to have pity on all, and I hope my blood will fall on my fellow men as a fruitful rain.