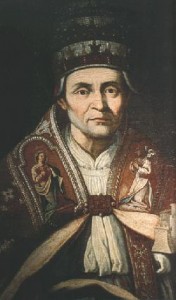 As a child, Peter had visions of our blessed Lady, and of the angels and saints. They encouraged him in his prayer, and chided him when he fell into any fault. His mother, though only a poor widow, put him to school, feeling sure that he would one day be a Saint.

In 1235, at the age of twenty, he left his home in Apulia, Italy to live in a mountain solitude. Here he lived as a hermit, assaulted by the evil spirits and beset with temptations of the flesh, but consoled by angels’ visits. After three years, his seclusion was invaded by disciples, who refused to be sent away; and the rule of life which he gave them formed the foundation of the Celestine Order. Angels assisted in the church which Peter built; unseen bells rang peals of surpassing sweetness, and heavenly music filled the sanctuary when he offered the Holy Sacrifice.

Suddenly, in 1294, he found himself torn from his loved solitude by his election to the Papal throne. Resistance was of no avail. He took the name of Celestine V, to remind him of the heaven he was leaving and for which he sighed, and was consecrated at Aquila.  After a reign of four months, Peter summoned the cardinals to his presence, and solemnly resigned his trust.

St. Peter built himself a boarded cell in his palace, and there resumed his hermit’s life; and when, lest his simplicity might be taken advantage of to distract the peace of the Church, he was put under guard, he said, “I desired nothing but a cell, and a cell they have given me.” There he enjoyed his former loving intimacy with the saints and angels, and sang the Divine praises almost continually.

At length, on Whit-Sunday, 1296, he told his guards he should die within the week, and immediately fell ill. He received the last sacraments; and the following Saturday, as he finished the concluding verse of Lauds, “Let every spirit bless the Lord!” he closed his eyes to this world and opened them to the vision of God.

Reflection.—”Whosever,” says the Imitation of Christ, “withdraweth himself from acquaintances and friends, to him will God draw near with His holy angels.”