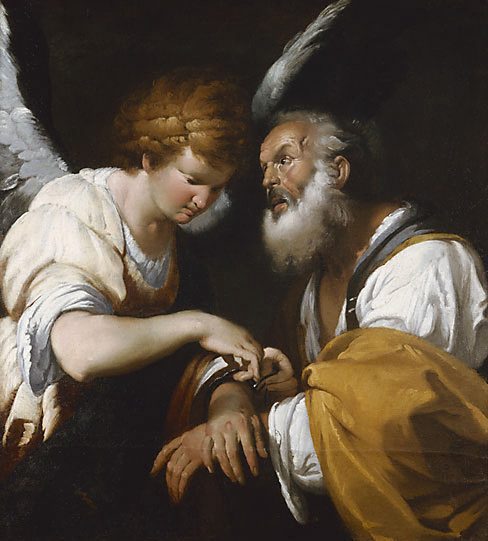 HEROD AGRIPPA, King of the Jews, having put to death St. James the Great in the year 44, in order to gain the affection and applause of his people, caused St. Peter, the prince of the sacred college, to be cast into prison. It was his intention to put him publicly to death after Easter. The whole Church at Jerusalem put up its prayers to God for the deliverance of the chief pastor of His whole flock, and God favorably heard them.

The king took all precautions possible to prevent the escape of his prisoner. St. Peter lay fast asleep, on the very night before the day intended for his execution, when it pleased God to deliver him out of the hands of his enemies. He was guarded by sixteen soldiers, four of whom always kept sentry in their turns: two in the same dungeon with him, and two at the gate. He was fastened to the ground by two chains, and slept between the two soldiers.

In the middle of the night, a bright light shone in the prison, and an angel appeared near him, and, striking him on the side, awaked him out of his sleep, and bade him instantly arise, gird his coat about him, put on his sandals and his cloak, and follow him. The apostle did so, for the chains had dropped off from his hands. Following his guide, he passed after him through the first and second wards of watches, and through the iron gate which led into the city, which opened to them of its own accord. The angel conducted him through one street, then, suddenly disappearing, left him to seek some asylum.

The apostle went directly to the house of Mary the mother of John, surnamed Mark, where several disciples were met together, and were sending up their prayers to heaven for his deliverance. As he stood knocking without, a young woman, knowing Peter’s voice, ran in and informed the company that he was at the door; they concluded it must be his guardian angel, sent by God upon some extraordinary account, until, being let in, he related to them the whole manner of his miraculous escape; and having enjoined them to give notice thereof to the rest of the brethren, he withdrew to a place of more retirement and security, carrying, wherever he went, the heavenly blessing and life.

Reflection.—This miracle affords a confirmation of the divine promise, “If two of you shall consent upon earth concerning anything whatsoever they shall ask, it shall be done to them by My Father Who is in heaven.”