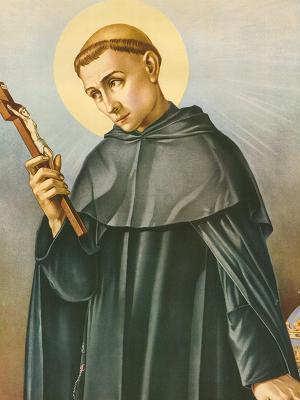 St. Philip Benizi was born in Florence, Italy on the Feast of the Assumption, 1233. That same day the Order of Servites was founded. As an infant at the breast, Philip broke out into speech at the sight of these new religious, and begged his mother to give them alms.

Amidst all the temptations of his youth, he longed to become himself a servant of Mary, and it was only the fear of his own unworthiness which made him yield to his father’s wish and begin to practice medicine. Alter long and weary waiting, his doubts were solved by Our Lady herself, who in a vision bade him enter her Order. Still Philip dared only offer himself as a lay brother, and in this humble state he strove to do penance for his sins.

In spite of his reluctance, he was promoted to the post of master of novices; and as his rare abilities were daily discovered, he was bidden to prepare for the priesthood. Thenceforth honors were heaped upon him; he became general of the Order, and only escaped by flight elevation to the Papal throne. His preaching restored peace to Italy, which was wasted by civil wars; and at the Council of Lyons, he spoke to the assembled prelates with the gift of tongues.

Amid all these favors Philip lived in extreme penitence, constantly examining his soul before the judgment-seat of God, and condemning himself as only fit for hell. St. Philip, though he was free from the stain of mortal sin, was never weary of beseeching God’s mercy. From the time he was ten years old he said daily the Penitential Psalms. On his death-bed he kept reciting the verses of the Miserere, with his cheeks streaming with tears; and during his agony he went through a terrible contest to overcome the fear of damnation. But a few minutes before he died, all his doubts disappeared and were succeeded by a holy trust. He uttered the responses in a low but audible voice; and when at last the Mother of God appeared before him, he lifted up his arms with joy and breathed a gentle sigh, as if placing his soul in her hand. He died on the Octave of the Assumption, 1285.