Trending Now
You are at:Home»Featured»St. Pius X and the Church of Nice
By Kevin M. Tierney on January 31, 2014 Featured, Learn & Live the Faith, MyChurchParish.com 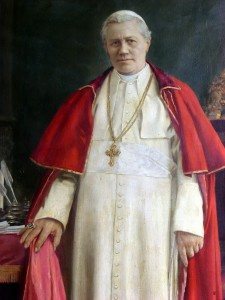 In today’s polarized Church, we like to label that which we don’t like.  We need to tell people we are the pure, and they are the impure.  A lot of Catholics do this by labeling those they disagreed with “radical traditionalists” or “radtrad”, even though more often than not these Catholics were faithful Catholics in union with the Pope and their local bishop.  Some fire back with a rather curious gem:  those they disagree with are part of the “Church of Nice.”  For a variety of reasons, I find this terminology troubling.

First and foremost, it is tough to nail down precisely what the church of nice is.  In one of his YouTube addresses, ChurchMilitantTV’s Michael Voris lists a total of twenty-one (!) characteristics of “The Church of Nice.”  When you give that many examples, all you are really saying is that “Church of nice” should be translated as “stuff I don’t like.”  When dealing with real dangers to the faithful, it is best to be clear and concise.  When speaking of the dangers of the modernist, Pope St. Pius X laid out 7 problems with their approach in the encyclical Pascendi.    There is a natural flow to his critique.

The critique of the church of nice ranges from the substantial (the RCIA director or priest teaching heresy) to the unfortunate but not heretical (confession isn’t offered enough) to the really annoying (not heretical but bland folk music trying to pass off as “worship music”) to the prideful (father doesn’t tell other Catholics how bad they are living their lives publicly during his homily), to Catholics exercising the lawful rights Holy Mother Church has given them.  (Receiving communion on the hand, which even though you can do it, you can also receive on the tongue.)  There is no unifying principle other than people really don’t like these twenty-one things.  For the Catholic who wants actual substance, they can only walk away disappointed.

That’s a shame, as some (but not all) of the things you typically hear about when it comes to the church of nice are problems.  The problem with the Church today is the same problem with the Church throughout history:  fallen human beings prefer gimmicks to the transformative power of God’s grace, and we have a tendency of doing what we think is best, rather than doing what God wants.  This message won’t drive YouTube hits, but it is the only real way to reform.

Let us take the second problem first.  You can think the discipline of allowing communion in the hand has had unintended consequences.  You can argue people should receive it on the tongue instead.  You can even argue that Rome should rescind the discipline.  Yet you can’t say that those who are doing it are part of a bad Church, since they are simply exercising their rights that the Bishop of Rome has given them.  In liturgical matters, that is the Bishop of Rome’s prerogative.  (Mediator Dei 58)

In like manner, it can be very frustrating when clerics, whether they be priests, bishops, cardinals, or even yes the Pope aren’t performing their ministries as well as they should.  We might even think we can do a better job.  Sometimes, we probably can.  Yet in areas where they have the lawful authority to command, we should indeed do as we are told, even if it is bothersome.  King Saul thought the command of the Lord was folly, and that under his vision he could make Israel great.  When he disobeyed for a noble cause, God was no less displeased.  (1 Sam 15:10-23)  Compare that with St. Pio of Pietrelcina (Padre Pio), who spent years under an unjust sentence in quiet obedience.  Consider St. Faustina, whose diary was placed on the Index of Forbidden Books.  In the end, her obedience was proof of her sanctity, the book was removed from the Index, and she was canonized a saint.  King David spent over a decade of his life persecuted by an evil king.  When that dynasty is ended, David kills the assassins who ended it.  (2 Samuel 5)    These saints suffered the wickedness of worldly men, sometimes of the highest authority, yet their obedience shined forth.

Above all else, let charity reign supreme in all we do.  When we condemn “the church of nice” we are condemning Catholics behaving badly.  Yet any honest Catholic would admit they too are behaving badly more often than not.  If we weren’t behaving badly, we wouldn’t need priests to hear confessions frequently.  This kind of charity is burdensome and will frequently appear pointless, but St. Pius X tells us it is the only way to live our lives in service to Christ:

“For the Lord is not in the earthquake” (III Kings xix., II) — it is vain to hope to attract souls to God by a bitter zeal. On the contrary, harm is done more often than good by taunting men harshly with their faults, and reproving their vices with asperity… This charity, “patient and kind” (1. Cor. xiii., 4.), will extend itself also to those who are hostile to us and persecute us. “We are reviled,” thus did St. Paul protest, “and we bless; we are persecuted and we suffer it; we are blasphemed and we entreat” (1. Cor., iv., 12, s.)… It may be that the fruit of our labors may be slow in coming, but charity wearies not with waiting, knowing that God prepares His rewards not for the results of toil but for the good will shown in it. (E Supremi 13)

If we really want to eliminate “the church of nice”, we first need to eliminate this bitter zeal from our own souls.  As with so many things, St. Pius X showed us how.