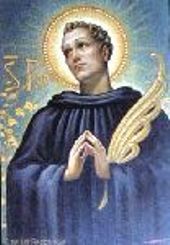 ST. PLACID was born in Rome, in the year 515, of a patrician family, and at seven years of age was taken by his father to the monastery of Subiaco. At thirteen years of age he followed St. Benedict to the new foundation at Monte Casino, where he grew up in the practice of a wonderful austerity and innocence of life.

He had scarcely completed his twenty-first year when he was selected to establish a monastery in Sicily upon some estates which had been given by his father to St. Benedict. He spent four years in building his monastery; and the fifth had not elapsed before an inroad of barbarians burned everything to the ground, and put to a lingering death not only St. Placid and thirty monks who had joined him, but also his two brothers, Eutychius and Victorinus, and his holy sister Flavia, who had come to visit him. The monastery was rebuilt, and still stands under his invocation.

Reflection.—Adversity is the touchstone of the soul, because it discovers the character of the virtue which it possesses. When matters go wrong with us, one act of thanksgiving is worth a thousand thanks when things are agreeable to our inclinations.