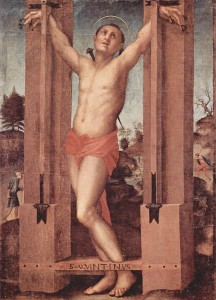 ST. QUINTIN was a Roman, descended from a senatorial family. Full of zeal for the kingdom of Jesus Christ, he left his country, and, attended by St. Lucian of Beauvais, made his way to Gaul. They preached the Faith together in that country till they reached Amiens in Picardy, where they parted.

Lucian went to Beauvais, and, having sown the seeds of divine faith in the hearts of many, received the crown of martyrdom in that city. St. Quintin stayed at Amiens, endeavoring by his prayers and labors to make that country a portion of Our Lord’s inheritance. He was seized, thrown into prison, and loaded with chains. Finding the holy preacher proof against promises and threats, the magistrate condemned him to the most barbarous torture. His body was then pierced with two iron wires from the neck to the thighs, and iron nails were thrust under his nails, and in his flesh in many places, particularly into his skull; and, lastly, his head was cut off. His martyrdom took place on the 31st of October, 287.

Reflection.—Let us bear in mind that the ills of this life are not worthy to be compared to the glory “God has reserved for those who love Him.”