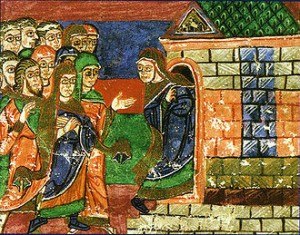 ST. RADEGUNDES was the daughter of a king of Thuringia who was assassinated by his brother; a war ensuing, our Saint, at the age of twelve, was made prisoner and carried captive by Clotaire, King of Soissons, who had her instructed in the Christian religion and baptized. The great mysteries of our Faith made such an impression on her tender soul that she gave herself to God with her whole heart, and desired to consecrate to him her virginity; she was obliged at last, however, to yield to the king’s wish that she should become his wife.

As a great queen, she continued no less an enemy to sloth and vanity than she was before, and divided her time chiefly between her oratory, the Church, and the care of the poor. She also kept long fasts, and during Lent wore a hair-cloth under her rich garments.

Clotaire was at first pleased with her devotions, and allowed her full liberty in them, but afterward used frequently to reproach her for her pious exercises, saying he had married a nun rather than a queen, who converted his court into a monastery. Seeing that Clotaire was inflamed by bad passions, our Saint asked and obtained his leave to retire from court. She went to Noyon, and was consecrated deaconess by St. Medard. Radegundes first withdrew to Sais, and some time after she went to Poitiers, and there built a great monastery.

She had a holy virgin, named Agnes, made the first abbess, and paid to her an implicit obedience in all things, not reserving to herself the disposal of the least thing. King Clotaire, repenting of his evil conduct, wished her to return to court, but, through the intercession of St. Germanus of Paris, she was allowed to remain in her retirement, where she died on the 13th of August, 587.