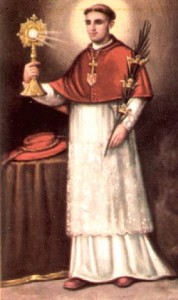 ST. RAYMUND NONNATUS was born in Catalonia, in the year 1204, and was descended of a gentleman’s family of a small fortune. In his childhood he seemed to find pleasure only in his devotions and serious duties. His father perceiving in him an inclination to a religious state, took him from school, and sent him to take care of a farm which he had in the country. Raymund readily obeyed, and, in order to enjoy the opportunity of holy solitude, kept the sheep himself, and spent his time in the mountains and forests in holy meditation and prayer.

Some time after, he joined the new Order of Our Lady of Mercy for the redemption of captives, and was admitted to his profession at Barcelona by the holy founder, St. Peter Nolasco. Within two or three years after his profession, he was sent into Barbary with a considerable sum of money, where he purchased, at Algiers, the liberty of a great number of slaves. When all this treasure was exhausted, he gave himself up as a hostage for the ransom of certain others. This magnanimous sacrifice served only to exasperate the Mohammedans, who treated him with uncommon barbarity, till, fearing lest if he died in their hands they should lose the ransom which was to be paid for the slaves for whom he remained a hostage, they gave orders that he should be treated with more humanity.

Whereupon he was permitted to go abroad about the streets, which liberty he made use of to comfort and encourage the Christians in their chains, and he converted and baptized some Mohammedans. For this the governor condemned him to be put to death by thrusting a stake into the body, but his punishment was commuted, and he underwent a cruel beating with sticks. This torment did not daunt his courage. So long as he saw souls in danger of perishing eternally, he thought he had yet done nothing.

St. Raymund had no more money to employ in releasing poor captives, and to speak to a Mohammedan upon the subject of religion was death. He could, however, still exert his endeavors, with hopes of some success, or of dying a martyr of charity. He therefore resumed his former method of instructing and exhorting both the Christians and the infidels. The governor, who was enraged, ordered our Saint to be barbarously tortured and imprisoned till his ransom was brought by some religious men of his Order.

Upon his return to Spain, he was nominated cardinal by Pope Gregory IX., and the Pope, being desirous to have so holy a man about his person, called him to Rome. The Saint obeyed, but went no further than Cardona, when he was seized with a violent fever, which proved mortal. He died on the 31st of August, in the year 1240, the thirty-seventh of his age.

Reflection.—This Saint gave not only his substance but his liberty, and even exposed himself to the most cruel torments and death, for the redemption of captives and the salvation of souls. But alas! do not we, merely to gratify our prodigality, vanity, or avarice, refuse to give the superfluous part of our possessions to the poor, who for want of it are perishing with cold and hunger? Let us remember that “He that giveth to the poor shall not want”