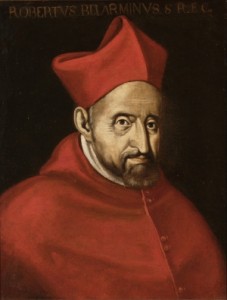 St. Robert Bellarmine, of whom Pope Clement VIII said: “The Church of God had not his equal in learning,” was born of a noble family at Montepulciano in Tuscany, Italy, in 1542. He lived until 1621, and it was a full life conspicuous for exemplary piety. He suffered from delicate health all his life.

Before his ordination into the Society of Jesus, Bellarmine was appointed to preach against heretical doctrine. With consummate skill he employed the teaching of St. Thomas Aquinas to offset heresies on grace, free will and papal authority. Pope Gregory XIII then called him to teach theology at the Roman College in Rome, where during his eleven years there he wrote his Disputations, a work so great that it was astounding that but one man could write it. Meanwhile he practiced penance and devoted himself to the service of the poor.

During his last years he became librarian of the Vatican Library and counselor to the Pope, and composed a treatise on the Art of Dying. He was canonized in 1930 and declared a Doctor of the Church in 1931.

Reflection. The writings of the Saints breathe religion, chastity, integrity, humility and charity. We cannot read their books without imbibing some of their spirit of holiness and love of virtue.