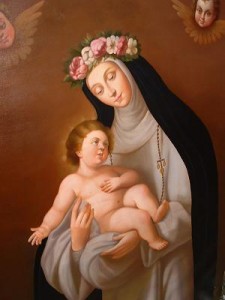 This lovely flower of sanctity, the first canonized Saint of the New World, was born at Lima in 1586. She was christened Isabel, but the beauty of her infant face earned for her the title of Rose, which she ever after bore. As a child, while still in the cradle, her silence under a painful surgical operation proved the thirst for suffering already consuming her heart.

At an early age she took service to support her impoverished parents, and worked for them day and night. In spite of hardships and austerities her beauty ripened with increasing age, and she was much and openly admired. From fear of vanity she cut off her hair, blistered her face with pepper and her hands with lime. For further security she enrolled herself in the Third Order of St. Dominic, took St. Catherine of Siena as her model, and redoubled her penance. Her cell was a garden hut, her couch a box of broken tiles. Under her habit Rose wore a hair-shirt studded with iron nails, while, concealed by her veil, a silver crown armed with ninety points encircled her head. More than once, when she shuddered at the prospect of a night of torture, a voice said, “My cross was yet more painful.”

The Blessed Sacrament seemed almost her only food. Her love for it was intense. When the Dutch fleet prepared to attack the town, Rose took her place before the tabernacle, and wept that she was not worthy to die in its defence. All her sufferings were offered for the conversion of sinners, and the thought of the multitudes in hell was ever before her soul. She died in 1617, at the age of thirty-one.