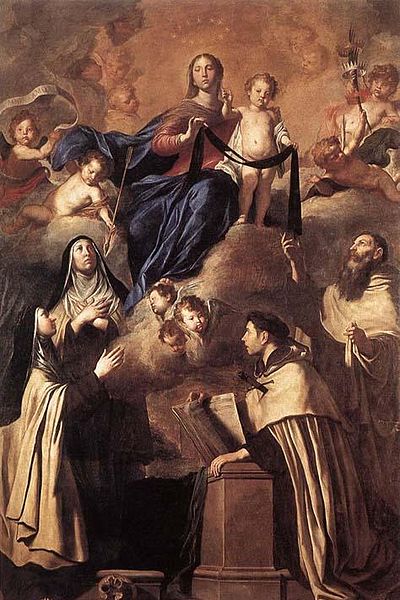 SIMON was born in the county of Kent, England, and left his home when he was but twelve years of age, to live as a hermit in the hollow trunk of a tree, whence he was known as Simon of the Stock. Here he passed twenty years in penance and prayer, and learned from Our Lady that he was to join an Order not then known in England. He waited in patience till the White Friars came, and then entered the Order of Our Lady of Mount Carmel. His great holiness moved his brethren in the general chapter held at Aylesford, near Rochester, in 1245, to choose him prior-general of the Order.

In the many persecutions raised against the new religious, Simon went with filial confidence to the Blessed Mother of God. As he knelt in prayer in the White Friars’ convent at Cambridge, on July 16, 1251, she appeared before him and presented him with the scapular, in assurance of her protection. The devotion to the blessed habit spread quickly throughout the Christian world. Pope after Pope enriched it with indulgences, and miracles innumerable put their seal upon its efficacy. The first of them was worked at Winchester on a man dying in despair, who at once asked for the Sacraments, when the scapular was laid upon him by St. Simon Stock.

In the year 1636, M. de Guge, a cornet in a cavalry regiment, was mortally wounded at the engagement of Tobin, a bullet having lodged near his heart. He was then in a state of grievous sin, but had time left him to make his confession, and with his own hands wrote his last testament. When this was done, the surgeon probed his wound, and the bullet was found to have driven his scapular into his heart. On its being withdrawn, he presently expired, making profound acts of gratitude to the Blessed Virgin, who had prolonged his life miraculously, and thus preserved him from eternal death.

Reflection.—To enjoy the privileges of the scapular, it is sufficient that it be received lawfully and worn devoutly. How, then, can any one fail to profit by a devotion so easy, so simple, and so wonderfully blessed? “He that shall overcome, shall thus be clothed in white garments, and I will not blot out his name out of the book of life, and I will confess his name before My Father and before His angels” (Apoc. iii. 5) .