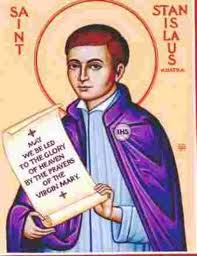 ST. STANISLAS was of a noble Polish family. At the age of fourteen he went with his elder brother Paul to the Jesuits’ College at Vienna; and though Stanislas was ever bright and sweet-tempered, his austerities were felt as a reproach by Paul, who shamefully maltreated him. This ill-usage and his own penances brought on a dangerous illness, and, being in a Lutheran house, he was unable to send for a priest. He now remembered to have read of his patroness, St. Barbara, that she never permitted her clients to die without the Holy Viaticum: he devoutly appealed to her aid, and she appeared with two angels, who gave him the Sacred Host. He was cured of this illness by Our Lady herself, and was bidden by her to enter the Society of Jesus.

To avoid his father’s opposition, he was obliged to fly from Vienna; and, having proved his constancy by cheerfully performing the most menial offices, he was admitted to the novitiate at Rome. There he lived for ten short months marked by a rare piety, obedience, and devotion to his institute. He died, as he had prayed to die, on the feast of the Assumption, 1568, at the age of seventeen.

Reflection.—St. Stanislas teaches us in every trial of life, and above all in the hour of death, to have recourse to our patron Saint, and to trust without fear to his aid.