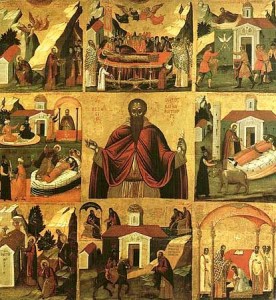 THEODOSIUS was born in Cappadocia (in what is now central Turkey) in 423. The example of Abraham urged him to leave his country, and his desire to follow Jesus Christ attracted him to the religious life. He placed himself under Longinus, a very holy hermit, who sent him to govern a monastery near Bethlehem. Unable to bring himself to command others, he fled to a cavern, where he lived in penance and prayer.

His great charity, however, forbade him to refuse the charge of some disciples, who, few at first, became in time a vast number, and Theodosius built a large monastery and three churches for them.

He became eventually Superior of the religious communities of Palestine. Theodosius accommodated himself so carefully to the characters of his subjects that his reproofs were loved rather than dreaded. But once he was obliged to separate from the communion of the others a religious monk guilty of a grave fault. Instead of humbly accepting his sentence, the monk was arrogant enough to pretend to excommunicate Theodosius in revenge. Theodosius thought not of indignation, nor of his own position, but meekly submitted to this false and unjust excommunication. This so touched the heart of his disciple that he submitted at once and acknowledged his fault.

Theodosius never refused assistance to any in poverty or affliction; on some days the monks laid more than a hundred tables for those in want. In times of famine Theodosius forbade the alms to be diminished, and often miraculously multiplied the provisions. He also built five hospitals, in which he lovingly served the sick, while by assiduous spiritual reading he maintained himself in perfect recollection.

He successfully opposed the Eutychian heresy in Jerusalem, and for this was banished by the emperor. He suffered a long and painful malady, and refused to pray to be cured, calling it a salutary penance for his former successes. He died at the age of a hundred and six.

Reflection.—St. Theodosius, for the sake of charity, sacrificed all he most prized—his home for the love of God, and his solitude for the love of his neighbor. Can ours be true charity if it costs us little or nothing?