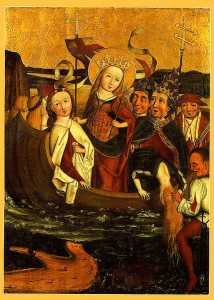 A number of Christian families had intrusted the education of their children to the care of the pious Ursula, and some persons of the world had in like manner placed themselves under her direction. England being then harassed by the Saxons, Ursula deemed that she ought, after the example of many of her compatriots, to seek an asylum in Gaul.

She met with an abiding-place on the borders of the Rhine, not far from Cologne, where she hoped to find undisturbed repose; but a horde of Huns having invaded the country, she was exposed, together with all those who were under her guardianship, to the most shameful outrages. Without wavering, they preferred one and all to meet death rather than incur shame. Ursula herself gave the example, and was, together with her companions, cruelly massacred in the year 453.

The name of St. Ursula has from remote ages been held in great honor throughout the Church; she has always been regarded as the patroness of young persons and the model of teachers.

Reflection.—In the estimation of the wise man, “the guarding of virtue” is the most important part of the education of youth.