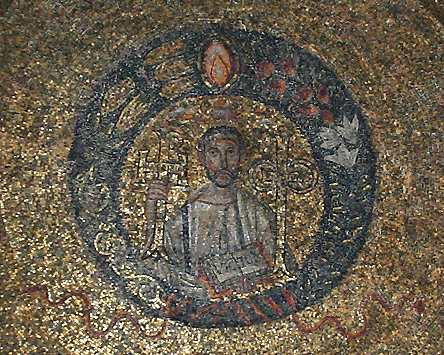 THE Emperor Maximian, reeking with the blood of the Thebæan legion and many other martyrs, arrived at Marseilles, where the Church then flourished. The tyrant breathed here nothing but slaughter and fury, and his coming filled the Christians with fear and alarm.

In this general consternation, Victor, a Christian officer in the troops, went about in the night-time from house to house, visiting the faithful and inspiring them with contempt of a temporal death and the love of eternal life. He was surprised in this, and brought before the prefects Asterius and Eutychius, who exhorted him not to lose the fruit of all his services and the favor of his prince for the worship of a dead man, as they called Jesus Christ. He answered that he renounced those recompenses if he could not enjoy them without being unfaithful to Jesus Christ, the eternal Son of God, Who vouchsafed to become man for our salvation, but Who raised Himself from the dead, and reigns with the Father, being God equally with Him. The whole court heard him with shouts of rage.

Victor was bound hand and foot and dragged through the streets of the city, exposed to the blows and insults of the populace. He was brought back bruised and bloody to the tribunal of the prefects, who, thinking his resolution must have been weakened by his sufferings, pressed him again to adore their gods. But the martyr, filled with the Holy Ghost, expressed his respect for the emperor and his contempt for their gods. He was then hoisted on the rack and tortured a long time, until, the tormentors being at last weary, the prefect ordered him to be taken down and thrown into a dark dungeon. At midnight, God visited him by His angels; the prison was filled with a light brighter than that of the sun, and the martyr sung with the angels the praises of God.

Three soldiers who guarded the prison, seeing this light, cast themselves at the martyr’s feet, asked his pardon, and desired Baptism. Victor instructed them as well as time would permit, sent for priests the same night, and, going with them to the seaside, had them baptized, and returned with them again to his prison. The next morning Maximian was informed of the conversion of the guards, and in a transport of rage sent officers to bring them all four before him. The three soldiers persevered in the confession of Jesus Christ, and by the emperor’s orders were forthwith beheaded. Victor, after having been exposed to the insults of the whole city and beaten with clubs and scourged with leather thongs, was carried back to prison, where he continued three days, recommending to God his martyrdom with many tears.

After that term the emperor called him again before his tribunal, and commanded the martyr to offer incense to a statue of Jupiter. Victor went up to the profane altar, and by a kick of his foot threw it down. The emperor ordered the foot to be forthwith chopped off, which the Saint suffered with great joy, offering to God these first-fruits of his body. A few moments after, the emperor condemned him to be put under the grindstone of a hand-mill and crushed to death. The executioners turned the wheel, and when part of his body was bruised and crushed the mill broke down. The Saint still breathed a little, but his head was immediately ordered to be cut off. His and the other three bodies were thrown into the sea, but, being cast ashore, were buried by the Christians in a grotto hewn out of a rock.