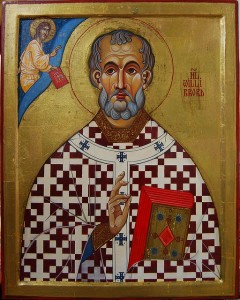 WILLIBRORD was born in Northumberland in 657, and when twenty years old went to Ireland, to study under St. Egbert; twelve years later, he felt drawn to convert the great pagan tribes who were hanging as a cloud over the north of Europe.

He went to Rome for the blessing of the Pope, and with eleven companions reached Utrecht. The pagans would not accept the religion of their enemies, the Franks; and St. Willibrord could only labor in the track of Pepin Heristal, converting the tribes whom Pepin subjugated. At Pepin’s urgent request, he again went to Rome, and was consecrated Archbishop of Utrecht.

Willibrord was stately and comely in person, frank and joyous, wise in counsel, pleasant in speech, in every work of God strenuous and unwearied. Multitudes were converted, and the Saint built churches and appointed priests all over the land. He wrought many miracles, and bad the gift of prophecy. He labored unceasingly as bishop for more than fifty years, beloved alike of God and of man, and died full of days and good works.

Reflection.—True zeal has its root in the love of God. It can never be idle; it must labor, toil, be doing great things. It glows as fire; it is, like fire, insatiable. See if this spirit be in you!