Trending Now
You are at:Home»Featured»Stay The Course
By Robert J. Gieb on April 27, 2013 Featured, Government & Politics 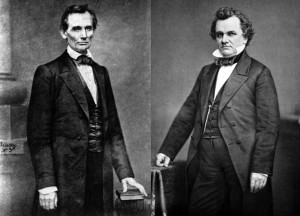 After losing to the abortion promoting Barack Obama in the 2012 presidential elections, one hears the same rumble and mumble amongst Republicans that was heard after the 2008 election: The loss was a direct result of the party’s pro life stand. If the party would just give in on this, women and young voters will flock to the party in droves. (Ditto same sex “marriage.”)

The rumblers and mumblers are of two factions. There are the neutrals who want the party and its candidates to remain neutral on abortion, and, I assume, all other life issues as well. And there are the evolutionaries. They want the party to reverse itself, and accept the killing of children in the womb as a settled right which should not only be not challenged, but affirmatively endorsed. In effect they want the Republican Party to take a page out of the Democratic Party political playbook, and simply announce that its principles, so deeply held for so long, have evolved, albeit after a very speedy evolution.

The sixteenth president of the United States, neither political slouch nor ineffective leader, had something to say to the neutrals of his day, and those words are instructive for those who want to claim neutrality while millions of innocent human beings are put to the knife. When Abraham Lincoln debated Stephen Douglas on the issue of slavery, Douglas tried to paint Lincoln as a radical, and portray himself as the reasonable candidate.  He argued that he was neutral on slavery, having come to no moral judgment on the issue.

The wise Lincoln responded that his very position of neutrality on slavery was not neutral at all, but an inherent acceptance of that evil. If Douglas really did hold that slavery was evil, said Lincoln, then he would be compelled to recognize that it was wrong conduct in which no individual had a right to engage, and conduct which the government should restrain. In effect, to allow such individual conduct, and protect it with the law, was to recognize slavery as conduct that was not evil at all. Twenty-first century Republicans who accept the argument of the 19th century Douglas, a Democrat, will simply be buying off on the same illogical conclusion as Douglas.

Beyond the contradiction of their argument, the would-be silent neutrals are like children playing make believe, arranging reality to suit their purposes. In this case, making believe that silence in the face of evil will not implicate them in the evil, and they will not be identified as supporters of the evil. Actually, they seem very much like Dante’s trimmers in the Inferno, the ignavi who occupy hell’s vestibule.

For Dante the ignavi are beneath contempt because of their lack of integrity and willingness to accommodate truth for the sake of expediency. These souls, just inside hell’s gate, are stung by wasps with their blood and tears sucked up by worms, while they eternally rush around chasing after every wind of fortune and promise of gain. (The very politically incorrect Dante would likely not be allowed to speak at most modern universities. However, many would agree that he does get the punishments to fit the sin.)

As to the instant evolutionaries, Lincoln had something to say to them as well, and his words in the 19th century are as true now as in his day. Lincoln, as we know, was not morally indifferent, and while his defense of the Republican Party’s opposition to slavery was political, it was more than that.

In a letter dated October 9, 1859 to Ohio Senator Thomas Corwin, who was pressuring Lincoln to jettison the slavery issue from his platform or at least to drastically minimize it, all for the sake of increased votes for the Republican Party, Lincoln rejected Corwin’s demands. His words are instructive:  “Drop that issue, and they [the voters]have no motive to remain, and will not remain with us. It is idiotic to think otherwise. Do you understand me as saying Illinois must have an extreme antislavery candidate? I do not so mean. We have, though, a man who recognizes that the slavery issue as being the living issue of the day; who does not hesitate to declare slavery a wrong, nor to deal with it as such; who believes in the power, and duty of Congress to prevent the spread of it.”

Lincoln recognized the truth, and did not run from it, but embraced it, even if was a difficult encounter. The evolutionaries, on the other hand, are yet another example of the current phenomenon of instant moral “evolution.” In a blink of the eye, a deeply held moral conviction, rooted in millennia of moral tradition and human wisdom, is flipped 180 degrees to a new moral conviction, just as deeply held, and supposedly rooted in the same millennia of moral tradition and human wisdom, but now seen with a new and infallible post-Christian understanding.

It is not just that the evolutionaries exhibit a lack of courage or moral insight. But theirs is a dangerous pride and lust for power at any cost. They want to accommodate the truth to protect their personal positions of wealth and power, and they think that they are smart enough to beat the system i.e. the truth.

In sum, there is no solution to be found in proclaiming what is false to be true. Abortion kills innocent human beings, and it is evil. No amount of moral alchemy can change this. That is why the issue of protecting the life of the innocent is “the living issue of the day,” and if the Republican Party drops that issue, many if not most Republican voters will have no reason to stay with the party.

Nor is there refuge in neutrality. As Lincoln noted about slavery, neutrality about abortion is nothing less than an affirmation of the killing. There is no free pass for Republicans or any other American citizen to sit on the sidelines on a moral issue as great as the protection of innocent human life anymore than on the issue of slavery. If you are not against it, then you are for it.

Many Republicans may also have allergies to wasps and worms.