Trending Now
You are at:Home»Columnists»“Story of Stuff” Videos Aim Stealth Indoctrination at Students
By Marybeth Hicks on July 18, 2012 Columnists, Education, Featured, The Economy 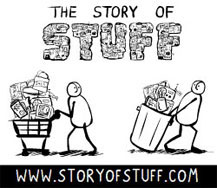 Yesterday, I noted a sure sign that summer is nearly over: There were commercials on TV for ingredients to make school lunches.

Already, the folks at Oscar Mayer are offering suggestions for how to make a lunch that kids will find nutritious and delicious, though they don’t offer any advice in the ads on how to keep school administrators from pitching your homemade lunch and force-feeding your kid chicken nuggets.

Advertisers aren’t the only ones looking ahead to the coming academic year. Yesterday, the prolific folks at the Story of Stuff Project released yet another short video that is sure to become part of the stealth curriculum meant to indoctrinate our children into an anti-capitalist worldview.

This time, it’s “The Story of Change,” and the message is alarmingly clear: America needs a “new economic system” that is more environmentally friendly, more “fair,” and more democratic (with a small “d”).

Perhaps you are not one of the 15 million people who have viewed the original film that launched this agitprop empire: “The Story of Stuff.”

“The Story of Stuff” uses simplistic animation and sweeping generalizations to “educate” viewers, especially the nation’s schoolchildren, about anti-capitalism and eco-radicalism. It was funded by the Tides Center.

In this documentary, creator Annie Leonard convicts Americans of hyper-consumerism and U.S. corporations of essentially raping the land and exploiting all the citizens of the world. I’ll synopsize, in case you don’t have 20 minutes to spare: All companies are bad, everything contains toxins, all governments are corrupt, but “democracy” will save the day. And the planet.

Between YouTube and DVD sales to schools and churches, an estimated 15 million people have seen “The Story of Stuff.” It routinely is assigned as part of science and social studies curricula. There’s even a faith-based program — “Let There Be Stuff?” — to inculcate the film’s message via religious education classes and Bible-study groups.

Now comes “The Story of Change.” Ms. Leonard’s premise is that personal behavior — while admirable — won’t solve our environmental “crisis.” It’s not enough to replace your light bulbs or carry your green cleaning products home in a reusable shopping bag.

Only a systemic change in our economy will produce the result we need, Ms. Leonard says. Just what would that change entail? For starters, an end to free markets and the adoption of a “new economy” as outlined by the neweconomynetwork.org.

This radical group says the purpose of an economic system is “to organize human activities in ways that support healthy and resilient human communities and ecosystems for both present and future generations.”

That’s a far cry from the vision of our nation’s founders.

The purpose of our American economic system is to permit the free participation of free people in whatever economic activity they choose. It’s the vehicle through which people realize their hopes and dreams, provide for themselves and their families, and yes, accumulate property. (Gasp.)

Ms. Leonard’s new film, sure to be a hit with social studies teachers across the country, promotes the notion that economic measurement ought not be based on growth, but on “those things that really matter: public well-being, environmental health and social equity.”

It’s the sort of lofty language that makes for a breezy civics class and gets children talking about what’s “fair” and “not fair.”

What’s really not fair? That millions more children will be taught that capitalism is inherently immoral, while socialism (disguised as “democracy”) will make everyone happy.

Because as we all know, socialist economic systems are never corrupt, right?