Trending Now
You are at:Home»Columnists»Strange Things are Done
By Jake Frost on May 17, 2011 Columnists, Featured, Live in Christ

The Bard of the Yukon, Robert Service, penned the immortal lines:

There are strange things done in the midnight sun,
by the men who moil for gold;
The Arctic trails have their secret tails,
that would make your blood run cold; 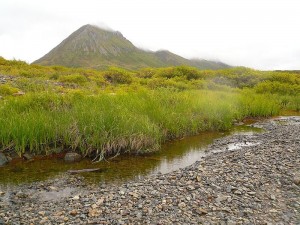 So began The Cremation of Sam McGee, the poem that would make his fortune.  First published in 1907, it’s remained in print ever since and generated over a million dollars for Service.  He was called “the man who made poetry pay,” to which he responded, “I make rhyming remunerative.”  A rare feat for a poet, in 1907 or today.

But long before the riches, Service bumped along a rocky road as best he could.  Growing up poor in Scotland and England, he left school early to go to work.  His initial lessons in the dog-eat-dog world of commerce were harsh, and he got to be familiar with the short end of the stick.  He took his lumps and pressed ahead, finally finding a stable, if lowly, position with a bank.  The work was less than thrilling, the prospects for the future meager, but it was regular work with a steady paycheck.  He kept at it for six years, but his heart was restless.  Finally, at the age of 21, he gave up the security of the bank to take his chances in the New World.  He emigrated on a tramp steamer riding steerage class in search of something more.  It was the beginning of a long journey working and wandering his way around North America, living in bunkhouses and labor camps.

In Ploughman of the Moon, the first volume of his autobiography, Service recalled an incident working on a farm in British Columbia during those hard-labor days.  The chief man was Big Fergus.

Big Fergus had been there for some years . . . He was a striking figure, six feet two of stalwart manhood; red-headed, blue-eyed, fresh-skinned . . . Socially he was superior to the other men . . . The reason he chose to work there year after year was that he was in love with the daughter of a neighboring rancher.  She was the belle of the district and had many admirers, most of them of the remittance-man type.  [Remittance-men were scions of wealthy families back East or in the Old World who lived on remittances from home and occupied themselves with sport – hunting, cards, parties – rather than work; as Service said:  “Younger Sons . . . sent out by their families who were glad to be rid of them.  They kept ponies and played polo.”].  Poor Fergus had little chance against these young sparks; but he kept doggedly on, glad of an occasional glimpse of his lady love.

One day Service was working with Big Fergus spreading manure on the fields.  In the process of doling dung left and right, Big Fergus got himself covered with the “cow-clabber”.

And at this very moment who should float into the scene but the lady of his dreams.  She was riding with a young dandy of a remittance-man.  She was very beautiful, with her hair in a fair cloud down her back.  She was costumed and gloved to perfection . . . I was gazing at her with admiration when [Big Fergus tipped his hat to her.  She] should have looked disgusted, but she did not.  Worse, she giggled.  Then she went her charming way, and I heard her and her cavalier chortling as they vanished.

“She laughed at me,” said Fergus.  “Did you not hear?  She laughed.”  He had gone pale and there were tears in his eyes.  It was tragic.  His long romance was ended . . . And after threshing, he left, never to return.

It’s one of life’s hard lessons.  Wanting something, even wanting it badly, won’t make it be.  And the strangest things done by men moiling beneath the sun usually occur when we forget that lesson and give in to willfulness, losing sight of the truth George Weigel expressed in Letters to a Young Catholic:  “. . . we are not in charge of our lives – God is in charge of our lives.”  Scripture gives an example of the syndrome:

. . . those who say in arrogance and pride of heart, “Bricks have fallen, but we will rebuild with cut stone; Sycamores are felled, but we will replace them with cedars.”  Is 9, 8-9.

The pride of heart that seeks self-assertion is a fool’s game.  Rather than trying to impose our will, we should be working to conform ourselves to the will of God.  Our modern world, steeped as it is in the “Ethic of I” and the false doctrine of “Will to Power”, sees that simple idea as a provocation – something to rail against.  But like most wisdom that’s withstood the changing winds of men’s passions over millennia, it’s actually a good idea – and full of hope.  Reality, like gravity, may pull us crashing back to the earth, but it always deposits us on solid ground.  Wherever we land, that’s where we’ll find the terra firma we need to stand, and get on with real life.  As Saint Augustine put it:  “For on whatever place one has fallen, on that place he must find support that he may rise again.”

The tragedy of Big Fergus wasn’t unrequited love.  It was the years wasted pursing a phantasm of his own willfulness that never had any substance.  When Big Fergus had his jolting collision with reality, though it was painful to the point of tears, he also experienced his great hope.  It was from that point he picked himself up and moved-on, venturing away from illusions into the real things God had in store for him.