Trending Now
You are at:Home»Church Street»Saint of the Day»Sts. Perpetua and Felicity, Martyrs
By Catholic Lane Administrator on March 7, 2015 Saint of the Day 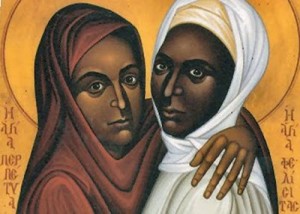 SAINTS Perpetua and Felicity suffered at Carthage, 7 March 203, together with three companions, Revocatus, Saturus, and Saturninus. The account of their martyrdom contains Perpetua’s diary, and thus represents the earliest Christian text written by a woman.

By a rescript of Septimus Severus (193-211) all imperial subjects were forbidden under severe penalties to become Christians. In consequence of this decree, five catechumens at Carthage were seized and cast into prison, viz. Vibia Perpetua, a young married lady of noble birth; the slave Felicitas, and her fellow-slave Revocatus, also Saturninus and Secundulus. Soon one Saturus, who deliberately declared himself a Christian before the judge, was also incarcerated. Perpetua’s father was a pagan; her mother, however, and two brothers were Christians, one being still a catechumen; a third brother, the child Dinocrates, had died a pagan.

After their arrest, and before they were led away to prison, the five catechumens were baptized. The sufferings of the prison life, the attempts of Perpetua’s father to induce her to apostatize, the vicissitudes of the martyrs before their execution, the visions of Saturus and Perpetua in their dungeons, were all faithfully committed to writing by the last two. Shortly after the death of the martyrs a zealous Christian added to this document an account of their execution. Their bodies were interred at Carthage. Their feast day was solemnly commemorated even outside Africa. Thus under 7 March the names of Felicitas and Perpetua are entered in the Philocalian calendar, i.e. the calendar of martyrs venerated publicly in the fourth century at Rome. A magnificent basilica was afterwards erected over their tomb, the Basilica Majorum; that the tomb was indeed in this basilica has lately been proved by Pere Delattre, who discovered there an ancient inscription bearing the names of the martyrs.

The feast of these saints is still celebrated on 7 March. The Latin description of their martyrdom was discovered by Holstenius and published by Poussines. Chapters iii-x contain the narrative and the visions of Perpetua; chapters xi-ciii the vision of Saturus; chapters i, ii and xiv-xxi were written by an eyewitness soon after the death of the martyrs. In 1890 Rendel Harris discovered a similar narrative written in Greek, which he published in collaboration with Seth K. Gifford (London, 1890). Several historians maintain that this Greek text is the original, others that both the Greek and the Latin texts are contemporary; but there is no doubt that the Latin text is the original and that the Greek is merely a translation. That Tertullian is the author of these Acts is an unproved assertion. The statement that these martyrs were all or in part Montanists also lacks proof; at least there is no intimations of it in the Acts.