Trending Now
You are at:Home»Featured»Suffering with Those Who Suffer
By Kathleen Woodman on April 22, 2011 Featured, Live in Christ 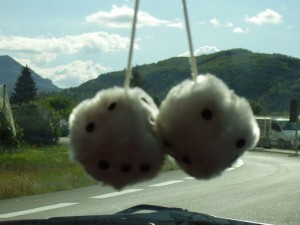 Heading home from school, I heard only my solitary footsteps hitting the sidewalk, and the rustling of books shifting in my book bag. Looking unruly and uncivilized, with an air of foreboding, a long patch of woods surrounded me on both sides of the street.   Not seeing anyone else around, I began to feel uneasy. I never did like walking through that stretch of lonely terrain by myself. I nervously began to pray a Hail Mary, and thought about my guardian angel.

As I reached a corner to cross the street, an unfamiliar aqua blue car unexpectedly pulled up and rolled to a stop, with the engine still running. A man in a beige jacket, with dark hair that had been slicked back, and a big pair of white fuzzy dice swinging carelessly from his rearview mirror, focused his gaze on me. He casually asked, “Do you want a ride home, honey?”  Even though I was just a third grader, my gut instinct was to extricate myself from this situation. I didn’t know who he was, and I had been told by my school and my parents not to accept candy from strangers. No way did I want to get into that dungeon of a car! I politely answered, “No thank you.”

Like a snake craftily uncoiling in order to snatch its prey, the man suddenly swung open the car door. The tone of his voice changed from friendly to threatening, as if I was a wicked and disobedient child. I sensed evil. “Let me see your dress,” he sneered. He was trying to maneuver me into coming closer. In my mind, I suddenly saw him grabbing me by the hem of my dress, dragging me into his trap, and taking me far away from my mommy and daddy. He wasn’t interested in seeing my dress at all. I was terrified. I wouldn’t come any closer, and may have stepped farther away from him. In the end, perhaps because he became aware of a boy who had arrived on a bike and was watching (and who later told the police what happened) he gave up and drove away without me.

Physically, I had escaped harm from this man. Emotionally, I did not. That day my sense of safety in the world was torn away. For awhile I had nightmares, and didn’t want to walk alone to school. I wondered, why did God let this happen to me? I didn’t understand.

Evil is a maddening mystery. Faith tells me that someday it will all make sense, when God will dry all the tears of His people, and turn all our sorrows into joy. God is good; even so, I often don’t understand why bad things happen. But, it’s human nature to want to understand. Yes, I know the theological reasons that explain why God permits evil to happen, and how God always brings good out of evil. There’s a larger plan we can’t see, and there’s a price for free will that includes letting people sin. It would be a servile, devilish horror to have no free will, and to be forced to obey God. We’d be robots, not human beings with inherent dignity. Instead, God’s goodness insures that we have a choice as to whether we will love our Creator.

Yet, when a human heart is bruised with pain or fear, it often doesn’t need a theological treatise; it needs love. When Jesus suffered and died on the cross for us, he not only saved us from our sins, He also suffered with those who suffer. He was tortured for those who are tortured in body or mind. He took it all on so that we could be healed, and so that we could behold a Savior who is with us in sorrow when we go through heartaches that are incomprehensible.

Yet it was our infirmities that he bore, our sufferings that he endured (Is 53:4).