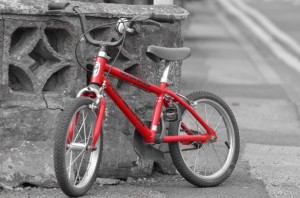 What’s the right age to let children ride their bikes to friend’s houses? Isn’t it just safer to drive them? Should I worry about what other parents might think?

Riding a bicycle used to be the standard mode of kid transportation, especially in the summer. I recall hopping on my bike on golden summer mornings and heading to a friend’s house, then spending the day going wherever the spirit moved us — the Tastee Twist for ice cream, another friend’s house for a swim, the park to play tennis — all without constantly checking in with my mom.

Sadly, parental fears about their children’s safety have caused too many moms and dads to put their kids in a virtual lock down, keeping them home where they’re “safe” (Playing video games or surfing the Internet? Hmmm.), rather than let them negotiate the real world and learn some independence and responsibility.

In fact, columnist and author Lenore Skenazy has been writing about this question for years. In her book, “Free Range Kids” (she runs a great blog of the same name), Ms. Skenazy essentially proved that childhood in America is the safest it has ever been. But the societal quest to rid our kids’ childhoods of any and all risk is creating a new and different problem: a generation of children who don’t know how to be resourceful, responsible or independent.

You can’t learn those things without practice. Several summers ago, inspired by Ms. Skenazy’s wisdom, I realized I had not given my son enough opportunities to exhibit independence. Moreover, I was starting to feel like Jimmy should be tipping me at the end of the frequent cab rides I was providing to facilitate his busy summer social life. So one day, I told him if he and a friend wanted to go to the mall, I’d take them only as far as the bus stop. They could figure out the rest on their own.

They thought I was kidding.

If your suburban 14-year-old also does not know how city buses work, imagine how he’ll function in a mere four years without you.

The right age for a child to ride a bike to a friend’s house? As soon as it’s feasible.

To start, choose a friend whose home is close enough to feel comfortable but far enough to constitute an act of independence. (Riding down or around the block ought to be a no-brainer. If you’re concerned about something this minor, you ought to just stop reading here and get Ms. Skenazy’s book).

Next, call the other parents and let them know you’re going to start letting your child ride over. If they question your judgment, let them know this is the first step in assuring your child doesn’t need your help in job interviews after college. (In other words, you should not worry what they think.)

Finally, teach your child how to safely make his way. Go over the rules of the road and talk about what he might do in different situations (What if you get lost? What if you fall and can’t ride home? What if someone seems to be following you in a car?), but don’t focus too much on the unlikely stranger danger scenario. The risk of being approached by a stranger is extremely low. More importantly, it’s the confident, resourceful child who knows what to do in such a situation.

Summer is a great time to take stock of your child’s independence. If your quest for safety (read: your own peace of mind) is robbing your kid of chances to grow up and branch out, challenge yourself to do more by loosening your reigns.

Not to mention the freedom you’ll gain when your child asks for a ride to a friend’s house and you say, “I’m busy. Ride your bike!”