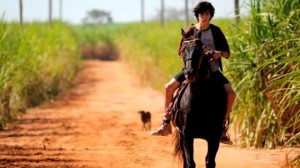 When a child goes missing, a parent experiences a range of emotions fueled by love and the desire to be reunited with their child. This situation is a nightmare no family wants to experience. Yet, if this unfortunate occurrence does strike a home, the strength and unity among family members can offer hope while searching for answers. In the case of parents who are on the brink of divorce, however, the emotional stakes posed by such an event create a different scenario, especially when the father must face the harsh reality that his career has taken precedence over his family.

In the film, Father’s Chair, director Luciano Moura takes his viewers on a cathartic journey of just such a father, desperate to find his missing15-year-old son. Although the family relationships are in shambles from years of neglect, Theo and Branca set their issues aside and unite to find their only child, Pedro. Without hesitation, Theo leaves behind his upscale lifestyle and even his medical practice in Brazil to travel the countryside in search of clues. Bound by love, but wracked with guilt over his lack of presence in his son’s life, he is forced to confront his own parental issues. He must face the dichotomy of the absent father he has become, versus the devoted father he longs to be.

The story unfolds with Theo and Branca fighting over her plans to move out of the house. Theo is frustrated because he can’t understand why his wife wants a divorce despite the good life he has provided for his family. What Theo doesn’t understand is that a home built on materialism may not survive and that placing his career over his marriage will only get him so far. This reality is portrayed allegorically by the unique contrast between certain rooms in the family’s home that are in shambles due to ongoing renovations.

Theo is also agitated when Pedro comes home after deliberately missing an appointment at the school, with his father, to set up a study trip abroad. Pedro has no interest in going, but Theo feels it will be a good opportunity for him. Theo’s underlying motive for his son’s trip, however, is his own pride. He just doesn’t want Pedro to see his parents go through the divorce proceedings.

While Theo and Branca fight over whether Pedro has the right to choose if he wants to go, Pedro notices a plastic-wrapped chair in the corner that has been shipped to the house as a gift for him. When he starts to unwrap it, he realizes it is a gift sent to him by his estranged father. After picking up the chair and throwing it against the wall, Pedro runs to his room and releases his frustration through artistic charcoal drawings of horses.

A few days later, Branca invites Theo to a special dinner to celebrate Pedro’s birthday, but when their son doesn’t come home, the frantic search begins. After some investigation, his parents discover Pedro bought a black horse using falsified documents about his age. Theo immediately sets off on the hunt to find his some. He finds small clues about where his son was heading and his search leads him to a plethora of characters, each having had an encounter with Pedro. From a poor woman who fed and housed Pedro one night, to a ferry boat captain who took Pedro and his horse across the river, Theo learns something from each of these persons that reveals an aspect about his son of which he never knew. This new found knowledge begins a transition for Theo from the physical journey of finding Pedro, to his own internal journey—that of dealing with his guilt from absence in his son’s life.

The film tells the story of Theo’s pilgrimage of redemption. One of the most defining moments in his absolution process takes place when he stumbles across a gypsy camp and helps a woman deliver her baby by a river’s edge. It is at this moment that Theo begins to experience a rebirth of his own fatherhood. Theo bathes in the river following the delivery of the woman’s child and this becomes a baptismal experience for him. He is consequently purged of his guilt due to his lack of involvement in his own child’s life.

Father’s Chair is a brilliant film that delves into the deep challenges that take place when family is breaking apart. Although Theo initially thinks of himself as a good father, the loss of control he experiences as he searches for Pedro sets him on the course that helps him see his many weaknesses as a father. Theo’s eventual rebirth into fatherhood helps guide his family from brokenness to a place of restoration, just as it has been promised, “He has made everything beautiful in its time” (NIV, Ecclesiastes 3:11).