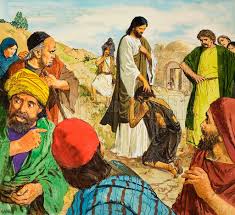 This Sunday’s Gospel, Mark 1: 40-45, is a bit puzzling.  Why after curing a leper, who then proceeded to advertise the event (contrary to Jesus’ explicit instructions), did it develop that the Lord “could no longer openly enter a town, but remained outside in desert places.” (cf. Matthew 8: 30-34; Luke 8: 27-38).

During our Bible study discussion last Wednesday night, most of us focused on the logistical problems associated with large crowds. We postulated that Jesus’ fame for cures might draw unmanageable numbers of people into any town he entered, thus explaining why he confined his preaching to the countryside where natural landforms could serve as makeshift amphitheaters.

I’m wondering if the problem was less logistical than due to the nature of the affliction, i.e. leprosy. Earlier verses in Mark 1 describe other sorts of cures like casting out demons, healing fevers and “various diseases.” And after such cures Jesus continues entering villages and towns “throughout all Galilee” and preaching in their synagogues (Mark 1: 39). Mark mentions no impediments to entering towns until after the leper is cured.

Note that the leper actually approaches so closely to Jesus and his retinue of disciples that the Lord is able to stretch forth his hand and touch him (Mark 1:41). The strict regulations of the day required lepers to remain at a considerable distance from healthy people — 100 paces according to one source,  or a rod (ten feet) according to another. By advertising the fact that Jesus cured him, and even let him approach and be physically touched, the leper sent an open invitation to other lepers to enter urban areas and to disregard distance regulations whenever Jesus was at hand.

Therefore, Jesus withdrew his ministry into “the desert places,” where vast crowds came voluntarily, notwithstanding the increased likelihood of proximity to lepers seeking cures. But in the villages and towns, sadly, the general population, including the local authorities, may have perceived Jesus ministry as a threat to public health. Especially the scoffers and doubters must have questioned his power to protect bystanders (or even himself) from the contagion of such a dread disease as leprosy. 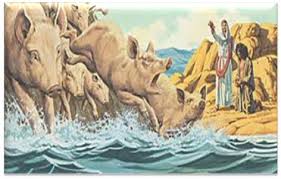 Elsewhere in Mark (5: 1-12) we learn of Jesus being made unwelcome among the Gerasenes who lived in the region of Decapolis. After casting some demons by the name of Legion out of the afflicted man and into a herd of swine, the 2000 or so pigs stampeded into the Sea of Galilee. Whereupon, the swineherds were faced with a sizable monetary loss. For this financial setback they put the blame squarely on Jesus, rather than on sin or demonic possession; and they invited Jesus, in no uncertain terms, to leave the district. Mark tells us that “great fear” had seized them — mainly, I suppose, less for fear of Jesus’ awesome power than because they feared additional economic loss if the Lord remained in the vicinity. St. Paul ran afoul of much the same selfish, mercenary motive when he cast a demon out of a possessed girl.  Her soothsaying had, until then, brought much profit to her masters (Acts 16: 16-18).

Upon being implored to leave, Jesus got into the boat and departed the district (Luke 8: 38-39). But as he embarks, unlike the case in Mark 1: 44 where he urges the leper to silence, here the Lord urges the ex-demoniac to tell his story to his family. Of course the report is heard around the Decapolis, and Mark 5: 20 says that “all marveled.” Except for the swineherds and the people in the “surrounding country of the Gerasens,” there is no mention (correct me, O reader, if I’m wrong) of more efforts to exclude Jesus from districts because he had cured people there.

Thus it seems that the general paranoia about leprosy (not all paranoia is unjustified) constituted — as the Lord evidently anticipated when he instructed the leper to keep his story to himself — a unique obstacle to Christ’s ministry, making it more difficult to move freely through the towns of Galilee preaching the Gospel.

There are any number of morals to this story, and three speak to the weakness in human nature.  First, the weakness of the ex-leper who cannot forbear; who lacks the self-discipline to tell his story to none except the priests.  He throws a monkey wrench into the process of preaching the Gospel when he lets his emotional excitement override his duty.  His debt of gratitude alone would require him to honor Jesus’ request.

Second, the weakness inherent in worldliness leads men to worry so much about the contagious nature of leprosy that they forget the pious service of cleansing a leper.  In fear for their own flesh, they would rather keep Jesus out of their towns and villages than admit into their midst the Lord’s power to cure body and soul.

Third, one of the many weaknesses among leaders is the propensity to “strain out the gnat and swallow the camel” (Matthew 23:15-28).  Rather than take any risk of coming into proximity with lepers, local authorities made the Redeemer of the human race persona non grata.  Likewise in postmodern America, our leaders exhibit starkly unbalanced priorities, like pressuring smokers to cease and desist, even as SCOTUS holds the floodgates open to a reeking tide of pornography.  The molders of public opinion emphasize the importance of healthy food to people’s lives, but advance abortion and other manifestations of the culture of death.  And in order to advance the secular trinity of tolerance, diversity and choice, our militantly secularist government does all it can to hide salvation in the Holy Trinity from the minds and spirits of the public, especially from kids in public schools.

Remember, then, that whether our status in society is high or low — lepers were very low indeed — our duties are never unimportant.  Neglecting them out of weakness can mess up a lot more than our own personal space.