Trending Now
You are at:Home»Featured»Syrian Prelate Bemoans Christian Exodus
By ACN-USA News on September 22, 2015 Featured, International Issues, Those in Need 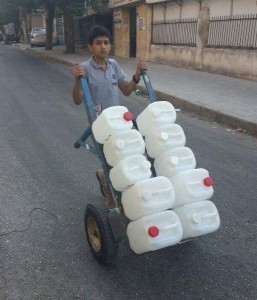 Scrambling for water in Aleppo, Syria

ROME—“We Christians are determined to stay on in Syria and continue to give our witness.” Grim-faced and speaking with determination, Chaldean Archbishop Antoine Audo of Aleppo, Syria, addressed media here today.

The archbishop commented on the mass exodus of Syrians, spurred on in recent weeks by the welcome shown by some European countries. He said: “All those who were able to leave have already left, while the others are still trying to leave the country. Above all our young men, who fear being called up for military service and don’t want to take part in a senseless war that has brought nothing but destruction.”

Most first head for Turkey, where they then try to board vessels for Greece or Italy. “And so many of them have met their deaths at sea,” the archbishop added, speaking at a press conference sponsored by international Catholic charity Aid to the Church in Need and Rome’s Foreign Press Assocation.

The mass emigration has not spared the Christian community in Aleppo, a place where the Christian minority has long formed a sizeable adn visable presence. “Before the war there were 150,000 Christians in the city. Today I don’t there would even be as many as 50,000. There is a real fear that our community might disappear altogether,” the archbishop said.

After going on five years of war the situation in Aleppo has become desperate. “The rich have gone, the middle classes have become poor and the poor have become destitute. More than 80 percent of the population is now unemployed,” said the prelate. Moreover, for over two months now, the city has been without water and electricity.

“One of our churches has a well in its grounds, and we try to distribute water to as many people as possible. On every street you can see children and youngsters carrying empty bottles, searching for water.”

Meanwhile, bombs continue to fall every day. Said the archbishop: “One part of the city is controlled by the government, while the rest is in the hands of fundamentalist groups who are constantly attacking the area controlled by the Syrian army—and that’s where the majority of the Christians live.The situation in Aleppo is one of the most critical in Syria, because we are just 25 miles from the border with Turkey, which is continuing to arm and welcome the fundamentalists.”

Archbishop Audo charged that the protracted nature of the Syrian conflict is a reflection of a tangel of international interests. He said: “We have been waiting for years for a political solution, for some glimmer of hope that the war might end. But there seems to be a desire on the part of the international community to see the war continue—just as was the case in Iraq and Libya.

“It is a determination linked to strategic interests in the Middle East region; as Pope Francis has reminded us more than once, commercial interests linked to the arms trade are in play.”