Trending Now
You are at:Home»Featured»Teddy Roosevelt for President in 2012?
By Dr. Joseph Postell on May 12, 2012 Featured, Government & Politics 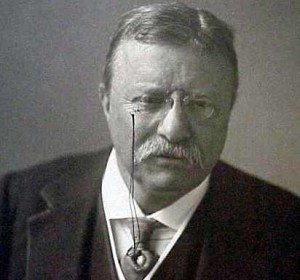 The 2012 presidential election is shaping up to be one of the most significant elections in American history. The outcome of major political issues such as Obamacare, carbon regulations, and our looming fiscal calamity hang in the balance.

In fact, President Obama has already framed the upcoming contest in the same terms as those of the 1912 election. When he traveled to Osawatomie, Kansas to give a major economic address, he intended to stake his claim as the heir to Theodore Roosevelt’s “New Nationalism,” the platform which would help define the 1912 election as a major turning point that put America on the path towards progressive-liberalism. It was during the 1912 election that Roosevelt led the creation of the Progressive Party, after he was rejected by his (former) Republican Party. That election, more than any other, offers important insights into the contemporary party struggle and the importance of the upcoming election.

Roosevelt gave his “New Nationalism” speech at Osawatomie in 1910 as the first signal that he was running for president in 1910, and that he would be willing to confront his own party for the sake of leading a progressive revolution. When the leaders of the Republican Party, such as Henry Cabot Lodge and Elihu Root, supported incumbent William Howard Taft over Roosevelt, the creation of the Progressive (or “Bull Moose”) Party was inevitable.

During the election, Roosevelt primarily argued for radical constitutional reforms, designed to permanently transform our republic into a direct democracy. He not only advocated direct primaries and the direct election of senators, but also supported the recall of the president and popular elections to overturn judicial decisions. (Obama’s recent comment that the Court will not take “an unprecedented, extraordinary step of overturning a law that was passed by a strong majority of a democratically-elected congress” is just another example of Obama’s significant intellectual debt to Roosevelt.)

As Sidney Milkis has eloquently explained in his recent book “Theodore Roosevelt, the Progressive Party, and the Transformation of American Democracy,” Roosevelt’s proposals—most of which were enacted shortly after the election—inaugurated “a new form of politics” in America. This new form of politics replaced party-centered elections (in which candidates stood for principles espoused by party leaders) with candidate-centered elections (in which the cult of personality prevented the discussion of real issues).

Roosevelt himself exemplified the power, and the danger, of this new approach to political campaigns. The 1912 Progressive Party convention was more of a spiritual gathering than a political meeting. Roosevelt delivered his “Confession of Faith” to the convention on the second day of its meeting, and ended by claiming that the party needed to “stand at Armageddon” and “battle for the Lord.” The audience responded by singing spiritual hymns, including one hymn in which they replaced the name of Jesus with Roosevelt! The religiosity of Roosevelt’s 1912 campaign helps explain the peculiar kind of fervor so many of Obama’s supporters expressed in 2008 (and likely will express in 2012).

In spite of its quasi-spiritual devotion to Roosevelt, the Progressive Party was hardly bereft of actual policy recommendations. The party’s platform in 1912 is nearly a carbon copy of the progressive-liberal playbook over the past 100 years.

In addition to Roosevelt’s plan for direct democracy, the platform called for “a more easy and expeditious method of amending the federal Constitution,” federal occupational safety standards, the minimum wage, “strong national regulation of inter-state corporations,” “the policy of conservation” (including public control of all national resources), the ratification of the 16th Amendment giving the federal government the power to levy an income tax, and “a single national health service.” In short, most of what progressive-liberalism has sought to achieve over the past 100 years was laid out by Roosevelt and his allies in the Progressive Party in 1912.

As Obama deliberately positions himself as the intellectual heir to Theodore Roosevelt, Americans would be wise to examine the transformative election whose centennial anniversary occurs this year. Despite all of the promises of “change” we heard four years ago, the truth is that very little about contemporary progressivism is novel. Barack Obama’s appeal today was foreshadowed a century ago by Roosevelt. In a profound sense, we are living in the world passed down to us by those 1912 progressives.

[Editors note: (1:15 pm, 5/14/2012) This article was previously attributed in error to Dr. Mark Discher of The College of Saint Mary Magdalen. Catholic Lane apologizes to Dr. Discher, to Dr. Powell, and to our readers for the error.]