Trending Now
You are at:Home»Featured»Terrible Twodom
By Fathers for Good on October 16, 2013 Featured, Parenting 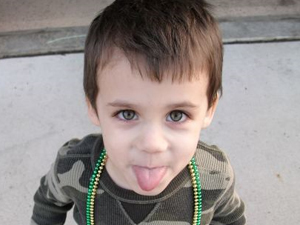 Some parents call it a meltdown, others use the more familiar word tantrum. I call it the Land of the Terrible Twos. It’s a place never far away where our active boy goes when he doesn’t get his way, or when he wants more attention.

He’ll be happy with his dessert as mommy and daddy finish dinner, when suddenly there’s a foot on the table, then another one in the rice pudding. A sharp rebuke does not do the job, and before I reach him our son has kicked askew the tablecloth.

Thus far the Land of the Terrible Twos is a place where my son only visits. Yet at times he appears to stake a claim and display an allegiance to the realm that threatens our family life. He seems to have a well-calculated inner motive to be mean, violent, disobedient and generally disruptive.

Of course his alliance is not yet set: he has not developed the inner awareness, or self will, by which he directs his actions and decisions. In the big world of responsibility, he’s a wayfarer, sometimes on the right track while following the good examples of others; sometimes lost in the crowd of unformed thoughts, desires, emotions and needs, and sometimes running headlong into the thickets of the Terrible Twos.

No! Me! Mine! – these are the passwords to this land, and he can cross the border as swiftly as a smile turns to a stiff lower lip.

Parents with children at or near the age have a natural sympathy and affinity with one another. “Is he 2?” we ask one another with knowing smiles as we pass in the supermarket aisles, struggle to hold a pair of squirming pants in the church pew, or stand with hands helplessly on hips at the playground as our little one tauntingly explores the narrow passages of a playscape, where we cannot reach.

“This behavior just seemed to click on the day after his second birthday,” my wife says repeatedly, apologetically to neighbors and strangers and anyone who will listen.

As I see it, my mission as a father is to make sure that my son doesn’t stay in the Land of the Terrible Twos for long and grow into the ruler of his own little realm – Terrible Twodom. We’ve all met adults who are the tyrants of Twodom, who make life miserable for us and for themselves.

To save my son from such a fate, sometimes I need to be a special-ops dad and swoop in to save my little guy when his behavior threatens himself or others. It’s a lightning operation: scissors out of hands, pencil out of ear, poison out of reach.

Other times I’m the good cop talking my son down from a stubborn precipice of ‘no’ he’s not sure he wants to be on. Or I’m the skilled mediator urging him to realize that the cookie he’s demanding is not worth giving up the benefits he’ll reap if he finishes his milk.

Too often, though, I play that frustrated character “Because I’m the Daddy,” as I grab him by the seat of his pants and plop him into his room, where he can talk it over with his favorite stuffed toy.

My wife and I hear his intellect, will and conscience developing as our son points a finger at Blue Bear and explains to him the dos and don’ts of our house: “No throwing toys. No kicking table. No scratching furniture.” After the prescribed time, when I come to bring him back to the land of family and community, he is all smiles. Happily he utters his deeply sincere “sorry” that is good for the moment – and then it’s time for some more rice pudding.