Trending Now
You are at:Home»The Catholic Family»Dating & Singles»Text Me Back or It’s Over!
By Anthony Buono on January 2, 2014 Dating & Singles, Featured, Marriage 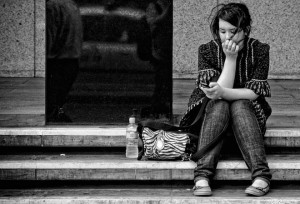 Let me start by saying it’s okay to not know where your partner is or what they’re doing every moment of every day.

There is an epidemic in today’s dating scene that is ruining relationships. It is the obsession to need constant knowledge of the whereabouts of the other.

If you think I am being over dramatic, let me ask you if any of these sound familiar to you:

–  You text your boyfriend or girlfriend and you don’t get an instant reply, so you start being suspicious.

–  You call but get no answer, nor a return phone call within a half hour, so it must mean you are not as important to them as you thought you were.

–  You see that your significant other has not been on Facebook for hours or all day, so you start calling or texting to find out what’s wrong.

–  You notice your boyfriend or girlfriend has friended someone of the opposite sex on Facebook, and it gets you thinking what the connection is.

–  Your text exchange has been going on for hours, and then all of a sudden he or she stops the exchange by sending no further text.  This makes you suspicious that he or she must have something “better” to do than keep texting you.

–  You can see on your iPhone that your text was read or can see when he or she was last online, and you start getting upset because there has not been an immediate reply.

Human interaction has taken a major shift with the dawn of the smartphone and tablets, providing the ability to have access to communication at anytime and from practically anywhere.  That’s not a bad thing.  This marvel of technology has given me the ability to get tons of work done without having to be in my office. Being able to respond to a time-sensitive email while I’m sitting at the barber shop waiting to get my haircut is absolutely wonderful.

But the down side is a really huge landslide when it comes to healthy and normal human interaction; namely, the unwritten common understanding that in today’s world, you must (and I do stress “must”) be immediately available and accessible at all times to everyone.  But most especially to the person you’re dating (or married to, for that matter).

You can’t fault people for having this attitude conditioned in their brain.  So many have subscribed to this commitment to be available at all times that those who choose to be so socially rebellious as to not be accessible by mobile phone and social media networks are truly social outcasts.

It’s a marvel how you see people clutching that phone everywhere they walk or sit or while driving.  It’s become an extension of the hand.  I certainly see it in myself.  I hold on to my phone for dear life, because God forbid I should put it away for an hour, let alone a whole day or week.  It’s that much of a staple to every day living.

But as wonderful as these mobile devices are, they are a risky business for your love life.  I don’t mean to put the blame on the mobile device itself.  How human beings use such technologies is always the root of any problem associated with them.

Your love life is in jeopardy if your attitude is firmly committed to the idea that the person you are dating must be available at all times.  It’s not healthy, nor is it normal to have such an expectation of another person.  No one should be that available.  And no one should have to feel guilty because they want a break from social interaction.  Some possible reactions one might receive from the person they’re dating should they decide to want some non-accessible time are:

“What’s that?  You don’t check your email, text messages, or answer phone calls while you’re driving?  What a waste of precious time that we could be talking about all kinds of important things during your boring commute.  Or what if I was deciding what outfit to wear and you’re not answering to help me decide?”

At the practical level, every person has the right and the need to not interact with others.  This applies to couples in love as well.  Just because you’re dating, or in love, or engaged, or married does not mean you have an absolute right to their time and to hold them accountable to you for the time they were unavailable.

It’s a terrible thing to feel like you must keep the conversation going, or you have to get back to the other right away lest you get in trouble.

A guy told me once that he went to the movies by himself to see a movie his girlfriend already told him she had no interest in seeing.  He shut his phone off in the theater (as the theaters are emphatic about us all doing). When he came out of the theater and turned the phone on again, there were many texts and voicemails from his girlfriend.  Each one escalated into further disturbance because she could not track him down. He broke up with her because of it.

I wondered why he would end a relationship that sounded like it was going fine otherwise.  Later, it made sense to me. I recalled how often he sounded annoyed that he could not get that little break from her.  He was just doing something for himself on his time.  Or so he thought it was his time.  The point is, he realized he could not have any time for himself and did not want a life like that.

He was right.  No one should have to live like that.  Is this what couples want in their relationships today?  I should hope not.  As impractical as it is, it’s much more spiritually damaging.  The spiritual life depends on time for solitude with no human interaction, just time alone with God.  Everyone has a right to time alone.  Do not make the mistake of demanding constant availability and immediate response from each other just because you have a mobile device.  It’s not fair, and it’s a deadly attitude in your love life.