Trending Now
You are at:Home»Featured»The $5 Protest: Why Can’t We Do This for Abortion?
By James Curley on November 22, 2011 Featured, Life Issues & Bioethics 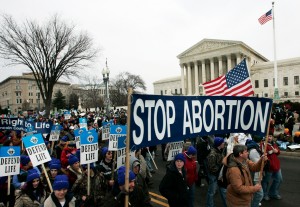 Thousands of people rallied in protest to newly announced $5 debit card fees.  It only took about one month for Bank of America to rethink and eliminate the fee.  Surely if 10 or 20 thousand can move the biggest bank in Americato change its fee policy so quickly and apologetically, then 50 million ardent pro-lifers should be able to scrap Roe v. Wade in less than 40 years.  You would think ….

If compared with more critical issues, one could easily become appalled at how quickly the populace reacts to a policy which has a minor affect on their pocketbook, yet seems to stand by apathetic to the plight of the unborn.  Certainly the citizens of this country bear grave responsibility for the millions of babies aborted since 1973.  No doubt there is much truth to the political wisdom which recognizes that push come to shove, people vote their pocketbooks.  I am not going to defend this American trend, but I think comparing the debit card fee rally to the pro-life cause is comparing apples to oranges.

First, let’s consider the bank fee situation.  Banks, and big banks especially, are very unpopular in the current economic climate.  The $5 debit card fee was implemented to positively affect their bottom line, but the $5 fee won’t make or break any bank.  With such widespread protest, which could further erode their customer base, and with so little real money at stake, it made sense to rescind.  The protesters didn’t sacrifice much of themselves here.  Most voiced opposition at their local bank when cashing a check or signed an online petition.  It was a minimal personal investment.

Now consider the personal investment in the abortion debate.  A good 20% of the population is ardently pro-life.  Most of this 20% will not vote for a pro-abortion candidate unless the opposing candidate is more pro-abortion.  Many of this 20% have invested a great deal of time and money in the pro-life cause.  They physically attend rallies, sometimes hundreds of miles away.  They volunteer at crisis pregnancy centers.  They pray, protest and sometimes risk arrest at abortion clinics.  They call and write their government leaders and donate money.

With all this effort, why hasn’t Roe v. Wade disappeared like the $5 debit fee?  The issue is complex, but several factors come to mind.

First, the stakes are higher.  The elimination of abortion is not just a defeat to social engineers who want “reproductive choice” as part of woman’s liberation, or to the feminists and homosexuals who seek destroy the traditional family, or even to so-called environmentalists who see humans as the enemy of the earth.  A whole industry has grown on the backs of aborted babies.  There is the abortion providers themselves, but also drug companies and research organizations that use aborted babies to conduct embryonic cell research in order to effect new cures and to develop new drugs and vaccines.  These are powerful entities who pour money and influence in keeping abortion alive.  There is one more industry which benefits greatly from the abortion culture, and that is the makers of contraception.  And herein lies the great division (oft unspoken) among pro-lifers.

Often the political champions of the pro-life cause don’t really grasp what is at stake.  For example, how is a child conceived of rape or incest less a human than one conceived otherwise?  People see the inconsistency of this position and may toss the entire movement off as just another political argument.

There is no coherent culture of life argument coming out of the movement as a whole.  Until we have more agreement on exactly what is the nature of the culture of life the message getting out there is too complicated.  At present, the message can sound something like this:  A fetus or embryo is only a human life if it is conceived under certain circumstances and only has inherent dignity if it is contained in a womb (under certain circumstances). Although this is a cynical interpretation, the inconsistency is apparent.

Generally a majority of Americans don’t like abortion, but it seems to be just one of many complicated issues on their radar.  To be sure, gains are being made.  The widespread use of ultrasound for example is changing hearts and minds, maybe because it gives a simple and coherent message about the baby in the womb without a spokesman muddying the waters.  We are seeing more and more attempts at the state level to pass legislation challenging the scope and practice of Roe v Wade.

So many of society’s problems are allies to the abortion-industrial-complex.  The absence of fathers, the breakdown of the family, the sexualization of children, the loss of continuity in local communities, the loss of self-determination in local communities, and the lack of living wage employment are all problems seldom addressed on the national stage.  These problems are used as excuses to make abortion the easy solution.

Rescinding the $5 debit card fee could be considered a good victory for Americans, but it was accomplished because it was so simple.  Perhaps the pro-life message will be more convincing and become urgent to many Americans if the culture of life is presented simply and coherently.  This can only happen if there is a better understanding of the culture of life among all segments of the pro-life movement.