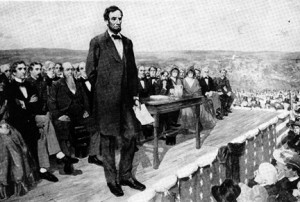 The 1857 Supreme Court Dred Scott decision said that Dred Scott, his wife, and their unborn child were not human beings, but were property to be bought and sold. Led by proslavery Chief Justice Roger Taney, the Court created a new national constitutional right to own slaves. Taney, a Democrat and a Roman Catholic, was born on a tobacco slave plantation, and was a former slave owner.

Abraham Lincoln rejected the Dred Scott decision and rejected the Court’s ability to declare that certain human beings were subhuman. He denied that the Court could resolve and decide the meaning of the Constitution for the other coequal branches of the government or for all the people.

Lincoln considered the Dred Scott decision lawless. He rejected the assumed supremacy of what he saw as a renegade Court, and therefore believed that the decision was non-binding on the executive and legislative branches. President Lincoln and the U.S. Congress, and many of the people, not only defied Taney and the Supreme Court, they refused to obey the decision.

Their defiance led to the Civil War.

Ironically, today the majority of the dead are minority children – over seventeen million of them are African-American – and many of these dead children are descendants of those for whom the Civil War was fought and won.

In the Fall of 1863 President Lincoln went to dedicate a cemetery to the dead soldiers of Gettysburg. The words he spoke there have become known as The Gettysburg Address. Here is:

A dozen score years ago our forefathers brought forth on this continent a new nation, conceived in Liberty, dedicated to the proposition that all men, women and children are created equal; and founded on the principle that they are all endowed, not by any government, not by any Constitution, not by any law, but endowed by their Creator with the inalienable right to life.

Now we are engaged in a great civil conflict, testing whether that nation, or any nation so conceived and so dedicated, can long endure. We are met at great battlefields of that conflict, in cities and towns across America, at the killing chambers of Planned Parenthood, and at numerous other death dealers whose business is abortion. We have come to dedicate a portion of these cities as the final resting places of thousands of innocent children who give their tiny lives; we are come to dedicate their unmarked graves, the dumpsters, the toilets, the biological waste incinerators, and the garbage cans that receive them. It is altogether fitting and proper that we should do this.

But, in a larger sense, we cannot dedicate — we cannot consecrate — we cannot hallow — the ground across America where they have died and where more will die. The children, who struggle, suffer, cry out with silent screams, and die have consecrated this land far above our poor power to add or detract. The world will little note, nor long remember what we say here, but it can never forget that the children have been and will continue to be killed here. It is for us the living, rather, to be dedicated here to the unfinished work which the children who die here have thus far so nobly advanced, the work they have begun in their small way, dying with their tiny voices unheard. But we hear them.

It is rather for us to be here dedicated to the great task remaining before us — that from these honored dead and living unborn children we take increased devotion to that cause for which  they give the last full measure of devotion; that we here solemnly vow that no more children’s lives are taken in this Land of Freedom, this Land Of Life . That we here highly resolve that all these children have not died in vain in this American Holocaust– that this nation, under God, shall have a new birth of freedom — and that government of the people, by the people, for the people, including all the people, even the smallest people now warm and happy within their mothers wombs, that this nation, these people, and these children shall not perish from the earth.