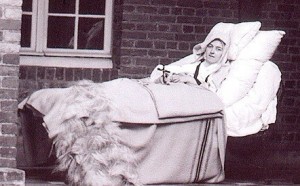 The topic for discussion at my local Theology on Tap recently was evangelization and Christ’s instructions to His Apostles to go out and spread the Good News:

Then Jesus approached and said to them, “All power in heaven and on earth has been given to me. Go, therefore, and make disciples of all nations, baptizing them in the name of the Father, and of the Son, and of the holy Spirit, teaching them to observe all that I have commanded you. And behold, I am with you always, until the end of the age.” (Mt. 28:18-20)

This great commission has inspired missionaries throughout the centuries to travel around the world in order to share the faith with others and help those in need. It also reminds those of us who are not called to go to such great lengths in our apostolate that we still have a duty to spread the Good News to those around us, our friends, family, co-workers, etc…

This is really the call to all Christians everywhere and without exception. But, one wonders, what about those who don’t appear to have too much to offer in the way of evangelization? The sick, the suffering, the severely disabled, the emotionally disturbed, the home bound. For many of these people life itself can be painful.Maybe they can’t communicate or get out of their own beds.

Naturally we’d be inclined to believe that under such circumstances they are “off the hook”, so to speak, when it comes to evangelization. If we did that, however, we’d be seriously selling them short.

On a retreat a few years ago, the priest told us that St. Josemaria would often solicit the prayers of the sick when he was just starting Opus Dei and he credits those prayers for helping the work spread so far and wide. He has called this the “apostolate of suffering.”

Those who pray and suffer, leaving action for others, will not shine here on earth; but what a radiant crown they will wear in the kingdom of life! Blessed be the “apostolate of suffering”! –St. Josemaria

If only every suffering soul could see how valuable their life really is – not only for their own sake, but for the mission of the church throughout the world!

Another great modern example of this apostolate is St. Thérèse of Lisieux who is the patron saint of missions, even though, in all her religious life, she never set foot outside the Carmel walls.

Though unsurpassed in humility and “littleness”, as she called it, Thérèse was a very ambitious little soul. In her autobiography she divulges that she had a great desire for the foreign missions and making Christ known to the whole world:

Ah! in spite of my littleness, I would like to enlighten souls as did the Prophets and the Doctors. I have the vocation of the Apostle. I would like to travel over the whole earth to preach Your Name and to plant Your glorious Cross on infidel soil. But O my Beloved, one mission alone would not be sufficient for me, I would want to preach the Gospel on all the five continents simultaneously and even to the most remote isles. I would be a missionary, not for a few years only but from the beginning of creation until the consummation of the ages. But above all, O my Beloved Savior, I would shed my blood for You even to the very last drop. (p. 192-193)

Even her superior acknowledged that she had such a vocation, but that her health prevented her from doing so (p. 217). Much of her life in the Carmel was spent in poor health, especially after she contracted tuberculosis, from which she would die at a very early age. Unable to actively participate in the missionary apostolate, she surrendered herself completely to the apostolate of suffering for the sake of souls:

“suffering opened wide its arms to me and I threw myself into them with love…Jesus made me understand that it was through suffering that He wanted to give me souls, and my attraction for suffering grew in proportion to its increase” (p. 149) 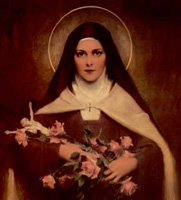 her life offering to her beloved Spouse and no sacrifice, no flower, was too small or insignificant for the Lord. While she suffered majorly in the loss of her father, the slow and painful death due to TB and a great trial of faith, Therese also offered Christ the little sufferings of everyday, which sometimes included dealing with a…less than agreeable sister in her community (Te-Deum relates that story).

“[T]o suffer for the sake of truth and justice” said Pope Benedict XVI in his second encyclical, is one of the “fundamental elements of humanity.” The abandonment of which would “destroy man himself.” Imagine the great good that could be done if, instead of considering life less valuable or without meaning because of deteriorating health or decreased physical mobility, we would all accept the sufferings that befall us and offer that which we endure to our crucified Lord for the salvation of souls.

When we unite our sufferings to Christ on the cross, it is not for the sake of suffering itself, but for the redemption of that suffering through the Victory of the eternal sacrifice of the Word made flesh. By taking up our own personal crosses we also “[fill]up what is lacking in Christ’s afflictions for the sake of his body, which is the Church” (Colossians 1:24). Not that Christ did not do enough Himself, but he invites us to participate with him in our own salvation and the salvation of the world.

There is so much wasted suffering in the world today.  God knows we are weak. He understands that our human nature rebels against any kind of suffering. That is why we must pray that He give us the strength to take up our crosses — big and small — and follow Him (Luke 14:27).

Food for thought: How often do we desperately pray that God will deliver us or a loved one from suffering without also praising Him for the gift of being able to share in the Cross and asking for the strength to persevere in the midst of affliction?

Prayer: You have given the sick and the suffering a share in your cross, give them patience and strength. Save those you have redeemed by your blood, Lord.