Trending Now
You are at:Home»Featured»The Avengers and Our Fascination with Saviors
By Marc T. Newman, Ph.D. on May 21, 2012 Featured, On TV and Movies 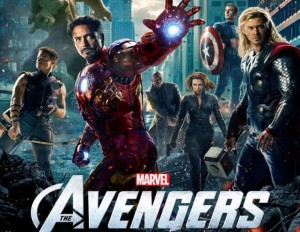 Like the Hulk, The Avengers, directed by the imaginative Joss Whedon, has smashed all previous weekend box-office records, hauling in over $200M in just three days. So what is it about these kinds of films that draws people to see them over and over? Part of it is the sheer spectacle of it all, some of it is star power – and piggy-backing onto heroes such as Iron Man, Thor, and Captain America, who are or will soon be franchises in their own right, doesn’t hurt.

But I think it goes deeper. Plenty of films with exciting battle sequences tank at the box office. The question always comes down to what’s at stake. People want to see stories about real good and evil, and they are fascinated by superheroes whose existence points to the fact that we cannot always save ourselves. Sometimes, we need someone to fight for us.

Why Bother With Good vs. Evil?

The Avengers, in keeping with most superhero films, is about a fundamentally moral battle. The demi-god Loki, like the masters who send him and the army he leads, represents evil. His aim is world domination so that he can subjugate the puny humans. He declares to some frightened citizens that they were made to be ruled, and he is happy to oblige. This is the common refrain of evil: the desire for power, combined with hubris, with domination as the goal. This calculus is true regardless of the scope of evil. Playground bullies and national tyrants have these elements in common – the only distinction is degree.

On the side of good stand the Avengers. But because theirs is a human good, it is not completely unalloyed. The Avengers are powerful, but not self-serving. They are better than humans at technology, fighting, and healing – but these are external traits. On the level of pure value, the Avengers are humble – willing to place their own lives on the line to protect those who cannot protect themselves. Despite their great power (which could be turned to tyrannical ends if they chose) these super-heroes do not seek to dominate, but to ensure freedom. But in fairness, and in a hint at realism, Whedon’s screenplay has the humans behind S.H.I.E.L.D. (Strategic Homeland Intervention Enforcement and Logistics Division – the government agency that oversees the Avengers) hedge their bets. What motivates S.H.I.E.L.D. Director Nick Fury and the Council does not appear to be raw power, but fear and distrust. It makes them dangerous, but not despicable.

This storyline is so old and familiar that few people ever stop to question why they are continually drawn to it. If human beings are, as scientific materialists insist, nothing but a random combination of time plus chance plus matter, then all nattering about a moral struggle is ultimately meaningless. But we intuitively know that this is a lie. Even materialists have a hard time suppressing feelings of outrage when they think they have been wronged.

One of the reasons that people flock to superhero movies is that it gives them a chance to cheer a narrative about the forces of good overcoming an invasion of evil. And what we celebrate on this grand scale, we also desire as individuals.

Getting the Red Off My Ledger

Of all of the Avengers, the most human is Natasha Romanoff/Black Widow. While she is an excellent fighter and an extremely talented spy, she has not always worked for the “good guys.” Her backstory is filled with assassinations and slaughters, and now that she has had an opportunity to reflect on that past, she confesses to both Loki and fellow Avenger Hawkeye that she has “a lot of red on my ledger” and she wants to clean it off.

People see not only the world in terms of good and evil, when they think about it in the quietness of their own hearts, they view themselves in those terms. We do not fare well. Regret and shame are hallmarks of human existence. We have done wrong – we know it – and we not only feel shame because of it, we want to do whatever is necessary to wipe it out.

What does it take? How can people erase the stain of evil deeds from the fabric of their lives? The route that Natasha takes is one of balance. She is hoping that by now doing right, she can counterbalance the wrong actions of her past. Thinking of this sort is common in the “work your way up by your bootstraps” American ideology. Many people believe that since they were the ones who got themselves into this mess, they will have to be the ones who get themselves out.

The Avengers represents an opportunity to discuss God’s take on this predicament and His solution. That we have violated eternal laws is clear. Like Natasha, we have red on our ledgers. But the violation of eternal laws require eternal punishments that we – being finite – are not equipped to pay. No amount of right action can expunge our records. We are guilty and need someone to redeem us.

Can superheroes save us from our enemies? As The Avengers shows, they can certainly stop external ones. By banding together, using their various gifts and talents, by fighting for freedom, the Avengers will overcome tremendous evil (I don’t think I’m really giving away much here).

But what superheroes cannot do is save us from ourselves. After Loki and Thor appear and decide to engage in a bit of Asgardian justice, Captain America decides to go off in pursuit of them. Black Widow warns against this plan of action, telling him that he is overmatched because these two are “pretty much gods.” Captain America shoots back, “There’s only one God, ma’am. And I don’t think He dresses like that.” In what was meant, I imagine, to be a throwaway laugh line designed to point up Captain America’s squeaky-clean image, is imbedded a significant truth.

The Avengers live in a fictional world filled with superheroes and villains. The forces at work are very powerful: evil against good, damnation or salvation – but even the resources of superheroes are limited. Many things are dressed up as gods, but are not. The same is true in our own world. Our battles are real. The stakes are high. Some put themselves forward as our saviors. But there is only one God, and He doesn’t dress like that. He is not limited, though He is patient. He will one day put an end to all external war and strife. And He has the power to get “the red” off our ledgers. Distinguishing this God from all pretenders is the great quest of life.

Finding Someone to Fight Our Battles

Unlike movies such as Independence Day or Battleship, in which human ingenuity is the seed of our salvation, superhero films place the hope of humanity on the shoulders of extraordinary people. As I noted a few weeks ago in my article on The Hunger Games, we are often represented, not by the hero, but by the victim – Primrose cowering before the Capitol or the various individuals that Loki would crush under his heel. We recognize that we are overmatched. We need someone to fight those battles, as Nick Fury tells the Council, that we cannot fight ourselves.

We have an Avenger – read through the Psalms or through Revelation and you will find out all about Him. More importantly, for us, we have a Savior; someone who interposed Himself between us and the greatest enemy we have ever known: physical and spiritual death. Though we die, we can live, physically and spiritually, forever. What is compelling about The Avengers and other superhero films is that they evoke a truth through narrative fiction that we can experience in real life. Christians need to be unafraid to share that story.