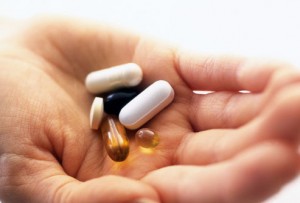 This morning began as any normally abnormal one around the Fenelon Clan abode – with me taking my handful of horse-pill vitamins, one agonizing swallow at a time. They say you can’t buy health in a bottle. Maybe so. But, I figure it’s like taking out an insurance policy: You go for years wasting your money because you don’t want to find out what would’ve happened if you hadn’t paid the premiums.

As I stood at the kitchen counter trying to down the supplements as quickly as possible, I dropped one. I knew because I heard it drop, but didn’t know which one it was because I wasn’t keeping track of which ones I’d taken and which I’d not. I was pretty sure it was a big white calcium tablet, so I scoured the floor for it. It was nowhere in sight. I checked under the wine rack. Nope. I fished under the stove. Not there, either. Between the fridge and counter? No. Under the rug? Niltch. At this point, I was fairly irritated, which made me all the more determined to hunt that derelict down. Surely, I’m smarter than a horse-pill vitamin! (That’s a rhetorical question, by the way.)

After a pout or two, I decided to try thinking out of the box. What if it wasn’t a calcium tablet that dropped, but rather one of the other supplement tablets that had fallen instead?

I decided to run my search and rescue from another perspective, so I moved to a different corner of the kitchen. And then I saw it. There, right under the spot I’d been standing before, was a neutral-colored (read puke-brown) multi-vitamin! It had blended in with the color of our hardwood floors, and so I overlooked it. Just for spite, I scooped it up, brushed it off, and downed it in one swoop.

I’d missed seeing the dropped vitamin on the first search because I’d stubbornly locked myself into thinking that it was a white, not brown, tablet for which I was looking. I missed the “right” vitamin because I was looking for the “wrong” one.

Isn’t that what so many of us do during the Christmas season? We lock ourselves into thinking that we only can discover Christ in a particular way – in a white tablet, if you will – when he might actually be revealing himself to us in a completely different way. Often, he appears right under the spot on which we stand, figuratively speaking. We miss him because we’re determined that he should meet our expectations.

We race through Advent, doing all those Christmas-y things that we think will lead the way to him, like shopping, decorating, baking, and partying. We might do some charitable works, which are noble and needed and give us a sense of worth.  The tree is lovely to look at, the music lifts our spirits (at least for a while), the lights are enticing, and the goodies make our tummies feel satisfied (temporarily). Family gatherings are a riot (sometimes literally), and giving and receiving gifts gives us a real high. The concerts warm our hearts and the liturgies elevate them to heaven. It’s all good and wonderful, and all of it is important.

However, if we look for Christ only in that – only in the white tablet of the Christmas glitz and activity – we risk missing him as he wishes to reveal himself to us, in the less conspicuous brown tablet. I’ve spoken with countless people who relate that, each year after all the Christmas hoopla subsides, they find themselves feeling somehow let down or sad. That’s because they’ve missed the subtle coming of the Babe in the quiet moments and small, unexpected happenings around them. More importantly, they miss his subtle approach within their own hearts because they continue to search for him outside of themselves. When all the exterior goings-on are over, they’re left feeling empty and alone.

We can change that, beginning right now, by stepping to another corner and looking at the layout from a new perspective. It’s fine to participate in all the holiday traditions and excitement; we just can’t let that be our only way to search for the Newborn King. We need to find creative, meaningful ways to observe his coming. Perhaps it means a new prayer routine, some concentrated Scripture reading, or a pilgrimage to a holy place. Maybe it means a daily ten-minute break to meditate on the miracle of the Word Incarnate, opening our hearts to whatever he has in store for us.It matters less what we do as it does how we do it – with love, humility, faith, and genuine desire.

When we stop looking for the big, white tablet and allow our eyes to rest on the less obvious brown one, we’ll discover more than we’d ever hoped. We’ll discover our Lord in all his magnificence – a magnificence so grand it won’t disappear when the decorations do. And we’ll have found it right under the spot on which we stood.