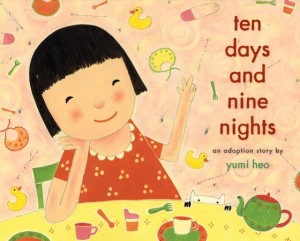 To kick off my first “Book Whisperer” column, I thought I would share some wonderful adoption resources. If you have other recommendations, why not send me a note?

My first favorite is Ten Days and Nine Nights by Yumi Heo (Random), for families with older children who are awaiting the adoption of a younger sibling (in this case, from Korea). Ms. Yumi — who was born and grew up in Korea — writes with simple charm, and her illustrations are especially beautiful.

Ms. Yumi writes: “The first time I met a child who had been adopted from Korea — where I was born and lived until I was 24 years old — was eighteen years ago on a ski trip to Massachusetts. I was cautiously learning to step with my long skis, and he was my teenage ski instructor. It was strange to see someone from my country who was so adept at a Western sport, but is also made me feel proud of him. He had come such a long way, without his birth parents, and was thriving . . . ” She wrote this book for the many Asian children she’s known who were adopted as children; having adopted the United States as her own home, Ms. Yumi says, “I’ve always felt a kinship with these children.” 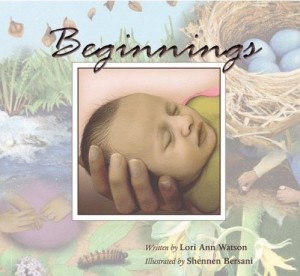 The second book, while not specifically about adoption, is nonetheless a beautiful book entitled simply Beginnings, by Lori Ann Watson and Shennen Bersani (Pauline Books and Media). With the eye of an adoptive parent, I was especially touched by one passage near the end of the book, which reads:

“And in the beginning — in YOUR beginning –
God thought of you, and he loved you.
He loved you so much that, at just the right time, he chose the perfect place for you,
inside the safe, warm shelter of your mother’s womb . . .”

Like many adoptive parents, I’ve told my children that they grew inside my heart before I laid eyes on them. This book reminds them of two additional truths: First,  whatever circumstances led to the adoption, their birth mothers indeed loved them from the beginning. Second, no matter what, we were all known and loved by God from the very beginning.