Trending Now
You are at:Home»Learn & Live the Faith»Apologetics»The Bread That Satisfies
By Mike Eisenbath on August 12, 2015 Apologetics, Evangelization, Featured, Live in Christ 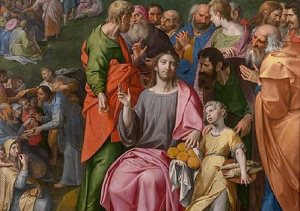 What do you want from God?

Wait, are you saying you don’t believe in God? Or you aren’t sure? Are you feeling like you will get to the “God stuff” some time later in life? Or that you’ve tried the whole faith thing before – maybe even felt you gave it a really good shot – and God just didn’t come through for you?

That was then. This is now.

Whatever your situation in life is right now … are you really happy? Really and truly? Do you know a peace that surpasses all understanding? When is the last time you went up the mountain and really paid attention to the view?

That’s why people followed Jesus when he was moving about 2,000 years or so ago. Even without the internet or cell phones or a 24-hour news cycle on CNN and Fox News, the word spread around Galilee about this rabboni – used twice in the Bible’s New Testament as the most honorable of Jewish titles of respect, used especially for spiritual instructors and learned persons.

Jesus is in first-century Jerusalem at the time of a great Hebrew feast. The temple area is busy, with holy people and “regular people” milling about, along with many types of animals that would be used for sacrifice. It is hectic. And it’s the Sabbath, making the day even busier. One area – a pool in which people have experienced healing – finds many people who are blind, lame and crippled. In the midst of the chaos, Jesus encounters a man who has been ill for 38 years – and heals him.

Jesus also tells the man to sin no more. All it does is aggravate those self-righteous Jews who want to persecute Jesus all the more. It prompts the rabboni, the Lord, to lecture them about the origin of his healing and his teachings.

“Amen, amen, I say to you, whoever hears my word and believes in the one who sent me has eternal life and will not come to condemnation, but has passed from death to life” (John 5:24).

We heard that story at a recent Sunday Mass. Throughout the liturgical year, we had been hearing from the Gospel of Mark until this current five-week stretch, during which we take a break to hear selections from the Gospel of John. All five of those Gospels are tied with the theme of Jesus being the “bread of life,” “the bread sent from heaven.”

In this particular reading, after he heals the man, Jesus leaves Jerusalem. Not alone, of course. His hand-picked companions travel with him. He finds out that many more have traveled ahead of him once he reaches his destination.

Jesus went across the Sea of Galilee. A large crowd followed him, because they saw the signs he was performing on the sick. Jesus went up on the mountain, and there he sat down with his disciples (John 6:1-3).

Little did the people of that crowd – about 5,000 men, not to mention uncounted women and children – know the powerful sign they were about to witness.

See, that’s the thing with God. When things are good for us, we tend to not bother with God as much. When we’re happy, or at least content, we feel pretty good about ourselves, since we figure the happiness is something we deserve for working hard or being smart or treating other people well. We eventually turn back to God as soon as we mess things up or fate turns on us.

When we’re physically, mentally, emotionally or spiritually lame, we look for God to heal us. When we’re sick, we want God to make us better.

And we end up getting more than we ever expected.

That crowd is hungry. Of course, Jesus makes sure they eat, despite having just a few loaves of bread and a few fish – with more than enough leftovers. It’s one of the great “Jesus miracles,” of course, the only one recorded in all four Gospels. He had made his mark on people before that, with all those healing miracles that got the towns of Galilee buzzing.

Through the years, I have heard speculation that Jesus didn’t actually turn a little bit of food enough so much that there were baskets filled with leftovers. Instead, some say, many of the people had food with them; the words of love spoken by Jesus coaxed them into sharing with the others who didn’t have anything. “What’s a greater miracle?” some cynics say. “Making a lot of food out of a little bit, or changing people’s hearts so they will share with strangers?”

Well, I’m not Jesus. I’m also not the greatest dad in human history. But I was pretty good at getting self-centered children to share their things with a brother and sisters when my kids were young.

I’m positive making a few loaves and fishes into a satisfying meal for thousands is a Divine miracle.

Once he drew the crowds with the flash and sizzle, though, that’s when he fed them with the food that mattered most: Food for their souls.

Consider the response we said during the recent Mass recital of Psalm 145: The hand of the Lord feeds us; he answers all our needs. And consider the words St. Paul wrote in his Letter to the Ephesians: “I, a prisoner for the Lord, urge you to live in a manner worthy of the call you have received, with all humility and gentleness, with patience, bearing with one another through love.”

I think those are some of our needs that they Lord satisfied with his words: a call mannered with humility, gentleness, patience and love. When I think of the world we call our own right now, I can think of no greater needs of our souls. The Kardashian Generation could benefit immensely from some humility, I believe. With the 2016 presidential campaign already heating up, we soon will hear harsh, negative criticism flung freely by those men and women who want to be regarded as leaders in the line of Washington, Lincoln and Roosevelt.

In an age of high-speed internet and mere three-minute waits for food, we could use some patience. In a country at war with terrorism and drugs, where gun violence in our cities and movie theatres seems ho-hum by now, where heated arguments seem around every corner – where is the love?

Yes, a meal of bread and fish can quell the hunger pangs of the moment. But stick around, folks. Listen. Pay attention to what the rabboni has to say.

Honestly: What do you really want from God?