Trending Now
You are at:Home»Learn & Live the Faith»Catechesis»The Catechism Saved my Soul
By Marlon De La Torre on October 12, 2012 Catechesis, Featured, On Books

“About this we have much to say which is hard to explain, since you have become dull of hearing. For though by this time you ought to be teachers, you need someone to teach you again the first principles of God’s Word. You need milk, not solid food; for everyone who lives on milk is unskilled in the word of righteousness, for he is a child” (Heb 5: 11-13).

G.K. Chesterton once said that to be inside Christendom one has to be near enough to love it (p. 10-11 The Everlasting Man). The same could be said about anything that truly piques our interest. This method of inquiry can serve us well when we attempt to find the truth in things. 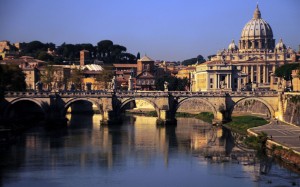 This brings me to a powerful conversation I had over a year ago with a good friend regarding the Catechism of the Catholic Church. We were discussing the gift the Catechism had served the Church since its inception in (1992) and how this book has shifted the Church’s catechetical landscape for the last twenty years. The Catechism reaffirmed the need for solid doctrinal content in Catholic instruction at all pedagogical levels addressing a problem that had developed for many decades of personal, experiential catechesis rather than catechesis grounded in the Deposit of Faith (Sacred Tradition and Sacred Scripture). What came next was a perfect example how the gift of Christ’s teaching (doctrine) can truly be life-changing.

My friend had been contemplating Catholicism for some time, but was still trying to grasp the complexities of Catholic thought and how the Church developed its doctrine. He had dabbled into the Church Fathers, read everything on St. Augustine, and began attending Mass incognito. I asked why and how in incognito, he simply said, “I did not want my Catholic friends asking me questions so I sat in the last pew with a rosary in my hand with my head down in prayer just like the old ladies up-front.” After a quick chuckle he described how the more he searched for the reasons to be Catholic the more he felt drawn to the unique divine character of the Catholic Church. However, something was still missing. He could explain up to a point the case for the Catholic Church as the Church Jesus Christ founded but for whatever reason something was still missing.

It wasn’t until we discussed the Catechism, the development of doctrine and its history in depth that he felt a surge rush through him, seeing for the first time what the Church was trying to convey. He exclaimed: “This book is a love story in word and deed.”

What he meant by this was that Christ’s love revealed through Sacred Scripture, is also found in the body of doctrinal truths compiled in the Catechism. He began to connect the dots and saw the Catechism in a whole new light, one that revealed the very language of faith. That night he began reading the Catechism, immersing himself word for word article for article until he finished it months later.

We continued our weekly conversations with the Catechism now by his side. I asked what eventually led to his love affair with the Catechism. “I realized that this treasure brings forth the realities of Christ in a way I never could have understood on my own. It clearly articulated everything I’ve always wondered about the Catholic Church and brought me peace. No other faith has a Catechism that explains and proves everything in detail like the Catholic Church does. Its doctrine is from Christ and not from man.”

G.K. Chesterton echoes this point in this way:

As soon as I had clearly in my mind this conception of something solid in the solitary and unique character of the divine story, it struck me that there was exactly the same strange yet solid character in the human story that had led up to it because that human story also had a root that was divine. (The Everlasting Man, p. 12)

Chesterton’s epiphany was that man grows in maturity within the Church not outside of it. My friend came to this realization through the Catechism. His union was complete; his soul is now at rest so to speak with the synthesis of the faith firmly within his hands. The Catechism indeed did save my friend’s soul.