Trending Now
You are at:Home»Columnists»The Cereal Box Principle
By Jake Frost on May 14, 2014 Columnists, Featured, Parenting 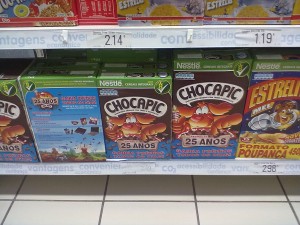 What’s the most widely read literature of the 20th century?  According to an informal, non-scientific poll (consisting of me and Mom, who happened to be talking about this on the phone), it’s not Pride and Prejudice, or The Lord of the Rings—it’s the cereal box.

Now, obviously that’s not because packaging prose is particularly powerful.  Your typical box of Cheerios ain’t exactly a page turner (it has no pages!).  But it’s the very fact of its boringness, its total lack of intrinsic interest, that’s so telling.  Who, upon finding themselves with some quiet free-time of an evening, would think of getting a tall drink with ice-cubes clinking in the glass, bunching up the cushions at one end of the couch for a pillow, then going to find a cereal box so they could lay down and savor reading it?

No one seeks out cereal box literature.

And yet, it gets read.

Therein lies the lesson:  people read what’s in front of them.

It’s the getting things in front of them that’s tough.

Madison Avenue has grown rich supplying answers to the riddle of how to do just that—of how to get someone’s product, their thing, their message, in front of you.

The strange thing is, we have that power—at least for ourselves and our families.  We can harness the power of Cereal Box Principle in our own home, as my sister Ruth proved back in elementary school.

A special guest speaker came to Ruth’s class.  I don’t remember who anymore.  I think he was the parent of one of her fellow classmates, but whoever he was I remember he was a personage of some prominence in the community (maybe a rabbi or minister or something).  Anyway, he came into Ruth’s class to give a talk, and he started with a question:  “Has anyone ever heard the poem ‘Children Learn What They Live’ ?”

My sister raised her hand.

“Good!” the speaker said.  “Do you remember any parts of it, of what sorts of things it says?”

He was probably was hoping to elicit a general statement, maybe “people learn to treat others the way they are treated themselves.”  Or, maybe if he was lucky, might even get a line or two from the actual poem.  But my sister Ruth was an odds buster.  She did better than that—she had the whole thing memorized, and she recited it right there on the spot!

“Wow!”  the speaker exclaimed in surprise.  “How did you learn that?”

“It’s on the wall in our bathroom,” my sister answered.

The Cereal Box Principal at work.

We don’t have to just wait for the true, the honorable, the lovely and the excellent to spontaneously pop into our consciousness—or the consciousness of our children.  We can put them there.  Just like Madison Avenue puts things in our consciousness, just like the Roman emperors did, all by using the Cereal Box Principle and just putting those things in front of ourselves and our families by putting them out around our homes.  We can hang poems and Bible passages and sayings that convey worthwhile truths on our walls.

When I was a kid we had a quote board in our breakfast room that we were all free to add to, and we all frequently did, putting up inspiring, insightful, or just plain funny lines and observations that we ran across.  As parents we can also hang beautiful images around our homes—paintings, photographs, icons, pictures of Jesus and Mary and the saints—and have statues of Jesus and Mary and the saints on kitchen windowsills and living room end tables.  We can have a crucifix in every room.

We can have beautiful music playing around the house.  And so much more—once we start thinking about it and looking, the possibilities of beautiful, true, and noble things that we can fill our homes with (and thereby our lives with) is endless.

In fact, we don’t have enough time to put all the good stuff that there is out there into our heads and hearts.  It’s like learning a language:  as many as we are ever able to master (and there are days I wish I could just get a decent hold on the one I was born with), there will always be dozens more out there that we’ve never even approached.

We can’t worry about that.  The important thing is to get started.  Especially since there’s no idle time—either we’re filling our souls with the good stuff, or junk is creeping in.  As Saint Thomas More said:  “Occupy your minds with good thoughts, or the enemy will find the bad ones.  Unoccupied they cannot be.”

So put the good stuff there.  It doesn’t have to be complicated, just put it in front of you.  It’s as simple as putting the cereal box on the table every morning.  Just be sure to remember my sister Ruth, and save the best stuff for the bathroom!