Trending Now
You are at:Home»Featured»The Chef and the Boy Band
By Brianna Heldt on November 2, 2012 Featured, Marriage, Parenting 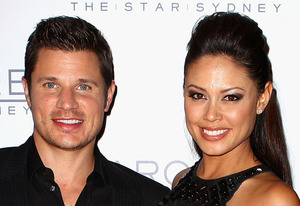 Judge me if you will, but I’m completely unimpressed by celebrity culture.  While I’m sure that these are all perfectly lovely people in real life, I just can’t fathom why I should care about who is in/out of rehab (again), or what the Kardashians are wearing.  If you wanted to torture me, you’d force me to read People Magazine cover to cover–with Housewives of Orange County playing in the background.

So I’m more than a little embarrassed to admit that I recently caught Nick Lachey, formerly of boy-band 98 Degrees, being interviewed by Rachael Ray.  (In my defense, I had the TV on to monitor hurricane coverage.  Totally legit…)  And I learned that Nick and his wife just recently had a baby.  Rachael asked him if his wife had enjoyed being pregnant or if she’d hated it, and he responded admiringly about how well she did, and how it all just suited her–garnering an obnoxious and syrupy “awwwwww” from the studio audience.  Who clearly loves themselves a good boy-band.

I admit I silently cheered for the guy myself.  And felt ashamed.

But then Nick made a huge blunder.

No, he didn’t use a word considered taboo for network television, and no he didn’t insult Rachael Ray’s prized soufflé.  Instead, he said how much he and his wife love their new son, and love being parents, and how all of it makes them want to have more kids.

That’s when the hammer dropped.  The convo screeched to an awkward halt as Rachael (who has no children herself) quickly admonished, “Oh but not until after you give your wife a break!  Maybe a few years, and you CAN’T have more than one in diapers, and I know someone who had four kids and they were crazy“!!!!

Nick of course found himself nodding along and, ultimately, backpedaling–an attempt to slither out of the man-jerk corner in which he’d been painted.  A discussion with a new dad literally beaming with pride over his son and his wife became Rachael Ray’s personal platform for correcting Evil Male Chauvinism.  Nick stood no chance.  Interview over.

After my initial thoughts of, “See?  THIS is why I don’t like celebrities!”, I reflected on the sad fact that it is socially unacceptable for a married man to want more children.  This is especially sad in a culture where men so often refuse to take responsibility for their offspring–if only all fathers were so in love with their kids.  Nick never said he wanted twenty mini-Lacheys.  Or that he wanted another baby today.  He also never said he thought everyone should have twenty kids.  All he did was speak in positive terms about fatherhood, the natural way his wife took to motherhood, pregnancy…and having more children.

Of course none of this is terribly surprising to me. Rachael’s deflection is something I’ve experienced myself.  I’ve had people banish me (or my husband) to the same corner as Nick.  When I was pregnant with my oldest child, I received more doom-and-gloom warnings about how my life was going to change than happy congratulations, and after she was born someone at church actually asked me if I had any “regrets”.  (Clearly my only regret was stopping to talk to this confused woman on my way out of the sanctuary.)

Ultimately, Nick’s big mistake in speaking about his family was not that he loved his son or his wife too much (no one would call that a bad thing), but that he deviated from the script that society has written for him.  His words and his attitude did not fit the narrative. And, people are dedicated to making sure that we all fit the narrative. So much so that they eagerly rain on a new father’s (or mother’s) parade and divert the entire conversation in an attempt to do so.

As far as Ms. Ray goes, I don’t necessarily believe she has an outright agenda to shame men who enjoy being fathers.  She may just simply be ignorant.  You see, something that the average 21st-century American fails to do is question their assumptions.  Few people ever stop to ask themselves why their knee-jerk reaction to the news of a pregnancy has negative underpinnings.  No one wonders why a new mom or dad can’t call parenthood wonderful without someone rushing in to talk about lack of sleep or diaper duty. People simply internalize the narrative, make sure their own life fits neatly within its confines, and take it upon themselves to project that narrative on others.

It is of course a frightening proposition to question your own assumptions, because you might just come to the conclusion that the culture and the assumptions are wrong.  You may wind up living a life you didn’t expect, or having to regularly defend your choices.  Maybe you’ll occasionally get stuck in the corner with all the other misfits–though if you do, you’ll certainly be in good company.  And I know personally that while it is not always easy, I’m ultimately grateful for asking the tough questions once-upon-a-time:

This is just a sampling of some of the things I’ve wrestled with over ten-plus years of marriage, and while the conclusions have not always been comfortable, I am convinced that the uneasiness is a sign that we are finally asking the right questions.  While no one finds joy in discovering they were previously wrong about something (or lots of things), I’ve been so completely delighted each time I’ve stumbled upon truth that none of that really matters.  I’m simply glad to be here.

So in spite of my skepticism about famous people (especially former boy-band members once married to Jessica Simpson), I do hope that fellow corner-dwellers like Nick Lachey continue sharing their hearts on marriage and children.  It is all too easy to capitulate to peoples’ low expectations out of a desire to fit the narrative, but this ultimately robs the culture of clear witnesses to beauty and truth.  We Catholics must therefore continue proclaiming God’s beautiful plan with our lives and words.

Even in the face of opposition from someone with their own line of pots and pans.

This article originally appeared at IgnitumToday.com.