Trending Now
You are at:Home»Featured»The Conversation We Need to Have About Charity
By Mary Kochan on September 19, 2013 Featured, Live in Christ, MyChurchParish.com, Those in Need 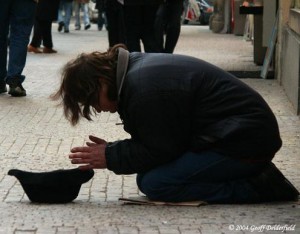 “The true protagonist of history is the beggar: Christ who begs for man’s heart, and man’s heart that begs for Christ.” – Fr. Luigi Giussani, founder of Communion & Liberation.

On Catholic Lane we are running two articles on the topic of charity with the aim of provoking the kind of conversation about this very important topic that can move us beyond the left/right, conservative/liberal categories and into thinking deeply, spiritually, like the Catholics we are. The articles are here: http://www.catholiclane.com/on-charity/ and here: http://www.catholiclane.com/on-pilgrimage-giving-the-addict-his-due/.

Jesus said that the poor would always be with us (Matthew 26:11). The Church tells us that she sees in the poor the face of the Lord. These are both hard things.

Sometimes the solution seems tantalizingly close and so logical. We’ve all heard the drill: in the United States, all you have to do is stay in school and graduate, don’t have children before you are married, get married and stay married, get a job and keep it, and you will not be poor.  Follow the rules and upward mobility is yours.

Do you think there are none among the poor who followed those “rules”? None among the wealthy who broke them?

Not that it’s an unattractive idea. It made sense to Asaph that God would be good to the upright, would reward them with prosperity and deny the same to those who were corrupt and violent. (Psalm 73) And how convenient it would be to be able to look upon success and wealth and know that it was as merited as its opposite. The lines would be clear. No mental gymnastics about deserving versus undeserving poor.  But no one sane thinks the world really works like that. The poor will always be with us and among them mingle the wheat and tares.

Poverty is an effect of sin that will be with us as long as sin is with us. If we attempt to locate the sin in the poor, then we have missed the point.

Sin makes men accomplices of one another and causes concupiscence, violence, and injustice to reign among them. Sins give rise to social situations and institutions that are contrary to the divine goodness. “Structures of sin” are the expression and effect of personal sins. They lead their victims to do evil in their turn. In an analogous sense, they constitute a “social sin” – CCC 1869.

No human-made meritocracy — or any other way of structuring society — can eliminate sin. Or poverty.

You Always Have the Stupid with You

Putting right out in front the disclaimer that I am well aware there are many highly intelligent poor people, it remains true that one of the most frustrating things about dealing with poor people is dealing with their stupidity. I’m not really talking here about ignorance, which can be remedied with education. I am talking about stupidity. It is not politically correct to point out that a lot of poor people are just plain stupid. But I have been around a lot of poor people who were really stupid and their poverty, if not the result of, was certainly exacerbated by, their stupidity.

Biblically, the “stupid” person or “fool” (especially of Proverbs and the other wisdom literature) is a person who is morally obtuse, not merely someone who has a low IQ.  If you spend a lot of time around poor people you will find yourself wondering at the incredible stupidity of many of the decisions they make.  Sometimes the decisions are result of the lack of knowledge which puts them at a disadvantage in dealing with more savvy people in our complex society who easily take advantage of them. (And whose fault is that?) Sometimes the decisions are due to a seeming inability to delay gratification or just act decently – more like the Biblical fool. Sometimes sheer hopelessness robs people of the capacity to make decisions in their own best interests. Regardless, I guarantee if you spend much time working with the poor you will see honest-to-goodness, plain old “dumb” on continual display.

There are a lot of complicated reasons why a person is simply stupid. When we look at any individual person, we have no idea what deprivations or deficiencies that person is suffering from. It is impossible to tell whether that person with his limitations is maximizing every one of his gifts, while another person with more native ability is coasting through life with ease. One thing is certain however, the Church is crystal clear about the priority of education and formation of the human person, both of which, in the earliest part of every person’s life, are largely out of his or her control. In other words, for the most part, it is not the fault of the stupid person that he or she is stupid. It really isn’t.

And to a great extent there is no particular merit in being smart. If you are intelligent enough to read the larger words in this article and easily follow the structure of the longer sentences, odds are that most of the decisions regarding your education, which allow you to do so, were not made by you. In any event, you did not create your own brain. Besides, human dignity does not diminish or increase based on intelligence (and the dignity of work must be made available even to those who cannot master highly technical or academic fields).

Another reason we will always have the poor with us is because we cannot entirely eliminate stupidity.

Our Lord’s Identification with the Poor and Stupid

So the Church says that in the face of these poor, who are often stupid, who have just as much likelihood of being venal as the wealthy do – she sees the face of her Lord. Why?

Well, here’s the way the Church explains it:

Christ Jesus, “though He was by nature God . . . emptied Himself, taking the nature of a slave” (Phil. 2: 6), and “being rich, became poor” for our sakes (2 Cor. 8: 9). I Christ was sent by the Father “to bring good news to the poor, to heal the contrite of heart”, (Lk. 4: 18) “to seek and to save what was lost” (Lk. 19: 10). Similarly, the Church encompasses with love all who are afflicted with human suffering and in the poor and afflicted sees the image of its poor and suffering Founder. It does all it can to relieve their need and in them it strives to serve Christ (Lumen Gentium, 8).

If we unpack this, we see that the Church bases her service to the poor on the Incarnation. We might be tempted to consider the fact that Jesus was born in materially poor circumstances as the key. But we would be wrong. Ask yourself for a moment, what is the greater difference: the difference between a poor human being and a wealthy one, or the difference between man and God? Jesus did enter into human society, become man, in circumstances of poverty. But that is not how he “emptied himself”. That was merely the punctuation mark on what he did. He became poor by becoming man. Had he become a rich man the difference would be minor. The real contrast is between the divine nature and the human nature, between uncreated Majesty and the lowly creature.

The poor with whom Jesus identifies are all of us. We are all poor.  This is the great value – the treasure, really – that the poor are in our midst.  The poor show us the reality of the human condition: they mirror back to us in their addictions our own addiction to sin, reveal our vulnerability and the desperation of our need, and yes, even our stupidity – for what is more stupid than our sin? Even apart from sin, who of us is not stupid compared with God?

Those who have more money easily suffer under the delusion that they can protect themselves from this human reality: “For the protection of wisdom is like the protection of money; and the advantage of knowledge is that wisdom preserves the life of him who has it (Eccl 7:12).” The course of real wisdom is not to be deluded by the illusion of control and self-sufficiency that money provides.   Christ’s warning about this is stark: “For you say, I am rich, I have prospered, and I need nothing; not knowing that you are wretched, pitiable, poor, blind, and naked”  (Rev. 3:17).

We need to give to the poor, not to end their poverty, but to save ourselves from our own.

But what kind of giving will save us and truly help them? As Eric Scheske points out, our bishops seem to have long favored the policy of big government programs to aid the poor and it looks like that policy is coming back to bite them — and all the rest of us. How unencumbered from the state can the Church be when a number of these programs in turn funnel tax dollars back into diocesan and other Church structures? For example: The Economist estimated that 2/3 of the nearly $5 billion in aid that Catholic Charities distributed to the poor in 2010 came from state, local and federal government agencies (http://money.msn.com/now/post.aspx?post=1a685537-b674-462d-9189-21772d2f4be4).  We might well ask what happens to the solidarity between a Bishop and his people when the Bishop can use the power of the state to reach into the pockets of his people to fund his projects? How is our solidarity with the poor affected when we absorb the message that we care through the poor by means of taxes?

This is the urgent Catholic conversation we need to have.