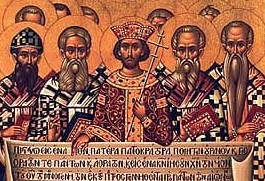 In his masterpiece, An Essay on the Development of Christian Doctrine, Blessed John Henry Cardinal Newman at the age of fifteen describes his initial conversion toward the teachings of the Catholic Church where he, “Fell under the influences of a definite creed, and received into my intellect impressions of dogma, which, though God’s mercy, have never been effaced or obscured” (pg. 16).

What parent wouldn’t want their fifteen year old to suddenly realize the importance of the Creed of Christ in their daily lives? Or better yet, to find that they actually believe in the Creed. Human beings are constantly seeking something to put their faith in as long as it’s easy to believe and follow.

Hence when presenting the scenario of a teenager believing in “The Creed”, i.e. the Apostles Creed and its tenets, we are left wondering in a cynical way whether this is actually possible. However, Divine Revelation clearly tells us that this is possible (Rom 10:9; Mat 28:17-20). Blessed Newman’s encounter with “the definite creed” found in the Catholic Church echoes the truth that Jesus Christ is the Son of God.  The image of the Corpus more than any other image reveals the saving realities of Christ and His Church expressed through the Creed (Jn 3:16-17; 1 Cor 11:23-33).

What do we mean by Creed?

In Latin the word Creed means: “I believe.”  “I believe” serves as the genesis to our Profession of Faith in Christ and His Church. It provides Christ’s faithful with a synthesis of the chief truths of the faith handed down by Christ (Mt 16:16-19; Luke 24) for all to believe freely. A clear and distinct sign of the Creed is found in the Apostolic Age of the Church (Acts 2:42; 1 Cor 15:3-5). It is no coincidence that upon our Lord’s Ascension, the Holy Spirit descended upon Mary and the Apostles to assure the continuation of the Church of Christ on earth and to firmly set a common language, i.e. the Creed, for all to know, understand, and follow.

The Sufficiency of the Apostles Creed

When you take the time to reflect and pray the Apostle’s Creed, you are left with an acute, yet profound exposition of the Catholic faith that is both enlightening and simple. When you take the first stanza of the Apostles Creed ending with: “ . . . who was conceived by the power of the Holy Spirit . . .” you receive the initial exposition of the faith found in the sign of the Cross which in turn reflects our Baptismal call in the name of the Blessed Trinity (Father, Son, and Holy Spirit).  Thus the Sign of the Cross serves as the preeminent symbol of our faith. In the Cross we have a symbol of faith that becomes our spiritual birth mark identifying exactly who we are. We take on the characteristic of Christ through the Profession of Faith.

Imagine if you were trying to construct a car from scratch and during the process you forgot a very important component needed for the car to work, motor oil. Your friend points this out to you and asks the obvious question:  do you know what you are doing? You dismiss your friend’s question because you are convinced the car will work without the use of motor oil and basically imply you know exactly what you are doing. Of course, just as the car cannot function without motor oil, so too do our own faith lives suffer when we ignore or omit the Creed.

This simple analogy reveals the depths people will go to reconstruct what God has revealed through His Son Jesus Christ and replace it with their own perceived enlightened thought. In other words, we will stop at nothing to develop our own “rule of faith” detached from God that we convince ourselves is indeed the only truth, i.e. Creed, that we will live by. In doing so, we abandon the Creed. Some blunt examples of forsaking the Creed are as follows:

Though this list is not exhaustive you get the point. The moment we abandon our Catholic Identity, i.e. the Creed of faith, we develop our own Creed to suit our needs apart from Christ and His Church. In many ways, this is exactly what is happening at this very moment with the calculated attack on our religious freedom and the attempt to redefine what the Church believes and professes. What better way to initiate mass doctrinal confusion than by creating a new set of doctrinal norms and Creedal statements; especially by those who purport to represent Christ and His Church when in reality they have willfully abandoned what the Church through Christ has taught for over two-thousand years.

St. Ambrose, the great “golden tongue” responsible for the conversion of St. Augustine, summarizes the importance of the Creed this way:

The Creed is the spiritual seal, our heart’s meditation and an ever-present guardian; it is, unquestionably, the treasure of our soul.