Trending Now
You are at:Home»Columnists»The Crisis of Community
By Russell Shaw on July 26, 2012 Columnists, Featured, The Social Order 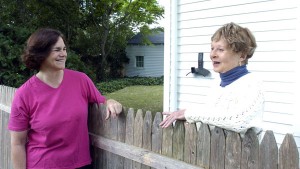 In recent years social critics like Robert Putnam (Bowling Alone) and Charles Murray (Coming Apart) have documented and deplored a decline of community among Americans. It’s  a development that affects churches along with other institutions of civil society.

But “decline of community” is an abstraction and hardly self-explanatory. A story told by a man I know offers a concrete illustration.

“My wife and I have lived for many years in a nice, quiet neighborhood inhabited by nice, quiet people. In many ways, we’re very happy. But as time passes, I become increasingly aware that everything isn’t as it should be.

“Let me tell you about the Smiths—not their real name, of course. They lived here almost as long as we have, and they’re nice, quiet people too.  A few weeks ago, my wife phoned their house hoping to chat with Mrs. Smith. Mr. Smith answered

“’We sold the house to our daughter and her husband. We’re moving.’

It turned out that they were going to a gated townhouse section several blocks away.  The movers would be coming in two days

“I was flabbergasted when my wife told me. As I mentioned, the Smiths had lived near us for many years. We weren’t particularly close friends, but our daughters had babysat their kids, and they were the only churchgoing Catholics in the vicinity besides ourselves. Yet here they were, all set to move, and they’d have gone without a word if my wife hadn’t happened to call.

“Now that, frankly, is what I call weird.  Yet as I think about it, it’s also typical of life in our neighborhood. People here are strangers who happen to live near one another. In all the years we’ve been here, only one person—one!—has been truly friendly, really behaved as you might expect a neighbor to do. That was a woman who lived across the street from us, and she, I’m sorry to say, moved into a retirement home several years ago. Now it’s entirely a neighborhood of nice, quiet strangers.”

And that, I suspect, is the “decline of community” in one isolated but perhaps not atypical case.

Is that really so bad? Writing in The Weekly Standard, author Gertrude Himmelfarb maintains that it is. “Individuals are increasingly removed from the traditional networks of ‘civic engagement’—family, friends, professional organizations, and other associations. This erosion of civil society results in a decline of ‘social capital,’ which bodes ill for democracy at home and for democratization abroad.”

And also for religion. Himmelfarb notes the problem this poses posed for “traditional denominational, neighborhood, family-centered churches.” The churches currently doing well in America, she observes, are megachurches where thousands gather to hear charismatic preachers and small, nondenominational “spiritual” churches “unstable in doctrine as in membership.”

In theory, a Catholic parish, understood as the locus of a eucharistic community, holds the key to a solution. But in practice? There are lively, vibrant parishes that are true communities. There are others that are not.  We need to know a lot more than we do about what makes the difference.