Trending Now
You are at:Home»Featured»The Cure for Your Child’s Boredom?
By Patrice Fagnant-MacArthur on September 6, 2011 Featured, Parenting 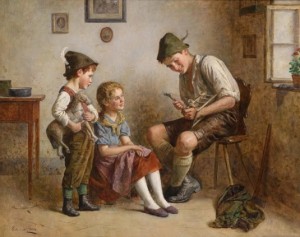 It’s back to school time, which often means it is also back to a frenetic pace of extra-curricular activities. We want our children to be well-rounded and well-educated and so we sign them up for all sorts of things: sports, dance, scouts, library programs, etc. There isn’t anything wrong with any of those things, but I’ve heard of children’s schedules that make me exhausted just listening to them. I know with many families having two working parents, after-school activities are necessary to make sure children are safe and occupied after school. However, our children need down time as much, if not more, than we adults do.

Imagination can only be truly cultivated in childhood. The ability to be creative and come up with new ideas and new solutions to problems (all valued in the workplace) depends on imagination. Developing imagination requires time to simply be and do one’s own thing.

There is a nine year old girl who lives next door to us. An only child who lives with her grandparents, she has spent most of the summer at our house playing with my children and just hanging out. She is a lovely young lady and I have enjoyed her company, but I can’t tell you how many times she told me she was bored this summer. I had never really thought about it much before, but that isn’t something I hear from my children or their other homeschooled friends very often. I started to consider why that might be.

The simple fact is that, in general, homeschooled children are left to their own devices much more than traditionally educated children. Homeschooling doesn’t require as much time on task as a traditional education so these children have more free time in which they need to occupy themselves. They are not told what they need to be doing or should be doing every minute of every day. They are used to amusing themselves.

Therefore when faced with a bulk of unoccupied time, they have no real problem finding something to do. In fact, their lists of what they would like to accomplish often exceed the free time that they have. When they get together as a group, they often create elaborate imaginary games which entertain them for considerable amounts of time.

So, then, could the cure for your child’s boredom actually be more unstructured  time? I realize not every parent can or should homeschool, but a concerted effort can be made to allow for more free time, at least in the evenings. Perhaps limit extra activities to one per semester so that every night isn’t occupied with something to do and someplace to be.

If your child is not used to it, they may find the unplanned time “boring” at first and will complain, but in time, their ability to use their imagination and fill that time with activities of their own choosing will develop. Soon, you may not hear them complaining about being bored anymore, and instead hear them complaining of not enough time to do all that they want to do!