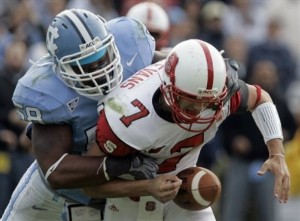 For more than a century baseball has been called America’s national pastime, and Major League Baseball is flourishing today. However, in recent decades, football—college and professional—has surpassed baseball in popularity and prominence. For many men and some women, fall weekends and football are synonymous. Both the National Football League and major colleges attract huge audiences to stadiums and television sets to watch games, and football fantasy leagues abound. The NFL owners’ lockout and potential cancellation of the NFL season caused widespread consternation.

And yet, a much greater “tragedy” was averted in 1905-1906, when President Theodore Roosevelt helped save college football. Although professional football did not begin until the 1920s, about 50 years after the origin of professional baseball, it might not have existed without Roosevelt’s earlier decisive action.

People rarely die from playing football today, but dozens did in the early 20th century. However, hundreds of players still experience concussions and major injuries, and a 2009 study reported that retired NFL players 50 and older are five times more likely to suffer from dementia than other Americans. That year, best-selling author Malcolm Gladwell called football “morally unacceptable,” and in 2010, “Time” argued that the sport was “too dangerous for its own good.” Nevertheless, these assaults on football pale compared to the battle waged by college presidents, professors, and journalists in the late 19th and early 20th century to outlaw the sport.

In “The Big Scrum: How Teddy Roosevelt Saved Football,” journalist John J. Miller examines the fascinating early history of college football. He carefully situates his story in the context of the professionalization and commercialization of sports, the influence of “muscular Christianity,” and changing views of medicine, nutrition, and physical fitness. Miller explains why college football became so popular by analyzing the contribution of the media; college alumni; pioneering coaches; the widespread belief that football promoted character, leadership, teamwork, and fitness; and the sport’s association with toughness and manliness.

Miller focuses on the lives of Roosevelt, Walter Camp, Harvard president Charles Eliot, and their support for, role in developing, or condemnation of, football.

Roosevelt did not play football at Harvard, but he attended many of its football games during and after college. Once the nation’s greatest advocate of fitness and “the strenuous life,” Roosevelt boxed in college, hunted deer and caribou, climbed mountains, raised cattle in the Dakotas, led a charge of his “Rough Riders” up Kettle Hill during the Spanish American War, played tennis, and as president walked so fast that the Secret Service scrambled to keep up.

More than any other individual, Camp, who either played or coached at Yale from 1876 to 1909—college football’s first powerhouse (Yale was 319-14-16 during this period)—is properly called the sport’s founding father.

Eliot led other college presidents who teamed with professors and leading muckraking journalists to prohibit football, which they denounced as a frivolous, brutal, and sometimes fatal sport. In 1893, the influential “Nation” magazine warned that colleges were becoming “training grounds for young gladiators,” while in 1897 the New York Times castigated football’s trend toward “mayhem and homicide.” Eliot compared football with prize fights, cock fights, and bull fights, complained that its supporters were either ignorant of its horrid effects or barbarians, and tried to abolish the sport at Harvard.

Supporters countered that football taught competition, resolution, courage, and endurance and channeled “masculine impulses toward productive ends.” Roosevelt censured the foes of football as “wrongheaded idealists” who failed to recognize that almost all human endeavors involved risks and “threatened to feminize an entire generation.” Only “through hard and dangerous endeavor,” which football embodied, Roosevelt asserted, would Americans ultimately achieve “true national greatness.”

In October 1905, the president invited the coaches of Harvard (where his son Ted was on the freshman team), Princeton, and Yale to the White House to discuss the need for rule changes to reduce football’s brutality (18 players died during the 1905 season alone). The coaches drafted a joint statement declaring their intention to play the game in an honorable, fair, less rough manner. Subsequent meetings of college coaches in late 1905 and early 1906 led to significant rule changes and the formation of the parent body of the National Collegiate Athletic Association. These changes substantially reduced football’s brutality, greatly diminished public criticism, and preserved the game.

Miller concludes that although Roosevelt was not “football’s savior,” he was probably “its most indispensable fan.” Although Miller details numerous deaths and serious injuries produced by early football, it is clear that he is pleased that the sport has survived and thrived, as are millions of other Americans. Miller may overstate Roosevelt’s role in “saving” college football, but his entertaining book shows that the outspoken, winsome Republican was a major force in the game’s continuation and development.