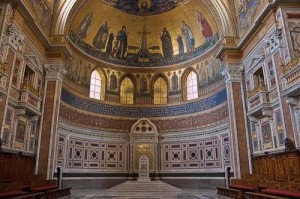 In high school science class I learned that water is the universal solvent. That is the extent of my scientific knowledge. In geography class I was taught that three quarters of the earth consists of water. And the water we drink today is the same water that the dinosaurs drank millions of years ago. I learned that at Disney World.

The Church believes that water is the agent of salvation.

When we receive the sacrament of Baptism God takes up permanent residence in our souls. The newly baptized is not just a Christian but also a temple. We become walking, talking, living, breathing, praying churches, “temples of the Holy Spirit,” Saint Paul says.

On November 9th we celebrate the anniversary of the dedication of the Basilica of St John Lateran. Constructed in AD 324 this basilica is honored as the seat of the Bishop of Rome, the pope’s home parish. In the 18th century Pope Clement XII (1730-40) inscribed these words on the basilica’s façade: “Mother and head of all the churches of Rome and throughout the world.” Beneath the basilica’s high altar is a small wooden table on which, according to tradition, St Peter celebrated Mass.

The Basilica of St John Lateran is the home of every Catholic throughout the world.

But the basilica is more than a house of worship, not simply an historic site. Rather, it is the embodiment of one of the great truths of our faith: that the Catholic Church is indestructible. Jesus said to Peter: “Upon this rock (that’s you, Peter) I will build my church and the gates of hell shall never prevail against it.” This is incontrovertible evidence that Jesus is keeping his promise.

Long ago the prophet Ezekiel (6th c. BC) bore witness to the universality of the Church. In a vision he saw water cleansing the Temple, preparing it for the Israelites to sacrifice there again. Captured by the Babylonians, the Israelites felt abandoned by God and wondered whether they would ever see Jerusalem again, would behold the glory of his Temple. Ezekiel offered them consolation and many shared his vision. “The angel brought me back to the entrance of the Temple, and I saw water flowing through its courts. Wherever the river flows, every sort of creature that lives can multiply.” Water then became a symbol of renewal and purification.

We in the Church are not so far removed from our spiritual ancestors. Many parallels exist between the Jerusalem Temple of antiquity and the Temple of the New and Eternal Covenant ratified by the blood Christ shed on the cross. But the ancient liturgies in Jerusalem centered on one sacred site because the original covenant with God was limited to the Israelite. Catholics worship in churches around the world. We celebrate an unbloody sacrifice instituted by Christ as the one single sacrifice for the perpetual forgiveness of sins. “Would not the sacrifices have ceased to be offered, since the worshippers, once cleansed, would no longer have knowledge of sin? … It is impossible that the blood of bulls and goats could take away sins” (Heb 10:4, 5).

Basically the Temple served as a bakery and a slaughterhouse. Temple sacrifices consisted of animals and grains, symbolizing the need of the people to have their temporalities blessed by God. The Jerusalem Temple was built by human hands and destroyed by human hands carrying torches, swords, pickaxes, catapults, and cauldrons of boiling oil. The Babylonians showed God’s people no mercy. Christ died on the cross and rose on the third day in accordance with the scriptures and established the new and eternal Temple in which we worship on Sunday. Holy Mother Church remains because of the promise of Christ and the protection afforded her by God through the Holy Spirit. Thus she stands strong as the light of the nations (Lumen Gentium 1:1).

During a heated argument with a Roman cardinal, Napoleon Bonaparte reportedly burst out, “Your eminence, are you are not aware that I have the power to destroy the Catholic Church?” The cardinal, so the story goes, responded ruefully: “Your majesty, we the Catholic clergy have done our best to destroy the Church for the past 1,800 years. We have not succeeded, and neither will you.”

The Church is indestructible because Jesus continues to keep his promise. The gates of the netherworld shall not prevail against her. Never have. Never will.

On the first Palm Sunday the Lord entered the Temple to worship only to find it corrupted by the merchants selling the sheep, the oxen, and the doves necessary for the sacrifices. It is one of the most famous stories in the New Testament, when Jesus cleanses the Temple out of respect for his heavenly Father. “Take these things out of here and stop making my Father’s house a marketplace!” (Jn 2:16) In the Old Testament the prophets wrote: “My house shall be a house of prayer for all but you have made it a den of thieves” (Is 56:7; Jer 7:11). Take it from Jesus. Let nothing defile legitimate worship in the house of God.

Perhaps the greatest difference between the Temple of antiquity and the Church, like Christ, the same yesterday, today, and tomorrow, is that the new dwelling place of God is portable. The Apostle writes: “Do you not know that you are the temple of God, and that the Spirit of God dwells in you? If anyone destroys God’s temple, God will destroy that person; for the temple of God, which you are, is holy” (1 Cor 3:16-17). Look to your right and to your left from your pew in the nave and you will see another church. Look in the mirror and realize you are a temple sacred to God and made holy by Baptism.

In this world nothing living, flora or fauna, can survive without water. That includes our immortal souls, created by God and wiped clean from Original Sin through Baptism. Jesus says, “If anyone thirsts, let him come to me and drink. He who believes in me, as scripture says, ‘out of his heart shall flow rivers of living water’” (Jn 7:37).