Trending Now
You are at:Home»Learn & Live the Faith»Catechesis»The Double Message of the Parable of the Sower and the Seed
By Marcellino D'Ambrosio, Ph.D. on July 10, 2011 Catechesis, Columnists, Featured 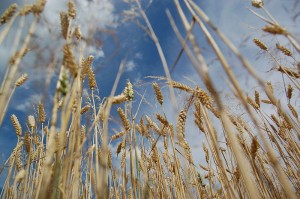 I’ve always loved gardening.  Seeds I’ve planted include carrot, cucumber, and of course, zucchini.  In each case, I’ve planted seeds in neat rows, expecting nearly all of them to sprout and yield fruit.

But the farmer in Jesus’ parable (Mat 13:1-23) uses the broadcast method.  Lots of seed cast everywhere.  And predictably, many of these seeds do not produce.  Some get eaten by birds.  Some sprout but then wither. Some seedlings get choked out by weeds.  Finally a few yield varying amounts of grain.

At the end of the story, Jesus says “they who have ears, let them hear.”  In other words, he wants us to learn something and take some action steps.

To respond to this parable adequately, we must view it from two different angles.  The first is to look at the story as if we are the seed.  Many who hear the gospel never seem to “get it.”  The message is stolen before it ever takes root.  Then there are the 50% of Catholic kids who receive the sacraments but disappear somewhere between age 18 and 35.  Shallow roots fail to equip them to take the heat of our pagan culture.  Then there are the 89% of lifelong, regular churchgoers who, according to George Gallup, have values and lifestyles identical to those of their pagan neighbors.  Their faith has been neutralized by bad theology and worldliness so though they look like wheat plants, their religion is fruitless.  Then there are those who stay out of serious sin, manage to do some good for some people, but all in all produce a mediocre harvest  Finally come the few who are not satisfied with just getting by.  They sink their roots deep into Scripture, Tradition, prayer and the sacraments, and produce a bumper crop.  We call these people saints.

In speaking to us as seed, Jesus is saying: “be careful. If you don’t make the effort to get thoroughly rooted in your Catholic faith, you just might not make it.  If do you manage to survive, you might produce absolutely nothing.  But you are called to bear much fruit (John 15), to yield 100 fold, to be a saint, to leave a mark on the lives of many that will last forever.  Don’t settle for anything less!”

On the other hand, we can look at the parable as if we were the farmer. Vatican II and all the Popes since have stately repeatedly and unequivocally that each of us is called to be an evangelizer, to tell others that Jesus Christ changes lives eternally and that the place to encounter him most fully is within the Catholic Church.  “But,” you may protest, “I tried it a few times and got nowhere.  I just don’t have the personality, don’t have the gift”

Jesus, the Son of God, indisputably had both the personality and the gift.  Yet when he sowed seed, much of it still ended up as bird food.  Consider the thousands he fed with loaves and fishes, the multitude that heard his sermon on the mount, the throngs that welcomed him on Palm Sunday.  Yet on the day of Pentecost, there were only 120 left in the cenacle, awaiting the Holy Spirit.  Notice, though, that the fruit borne by these 120 plants eventually filled the whole world!

To get the few that bear fruit, lots of seed must be sown by lots of people.  So regardless of whether or not we think we have green thumbs, we farmers are being commanded through this parable to get the seed out there, sowing it everywhere we go, undeterred by the birds, the weeds, and the scorching sun.