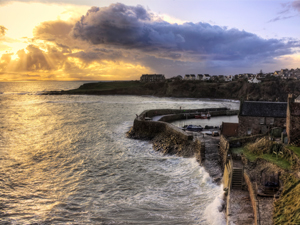 The end of the world is coming soon. Not the eschaton, that final end of all things and the return to their Maker of all that is. That may come tomorrow or in 10,000 years, but in either case I don’t find the subject interesting; there is nothing much I can do about it one way or the other. It is in somebody’s hands. No, I merely mean the end of our world, that crazy network of political and economic relationships that are the subject of the daily news reports. Now, that is interesting because it is something we can do something about; this is a problem entirely in our hands. And on the one hand, this could be, and probably will be, a time of madness and violence; the old order never goes gently into that good night, and people will be fearful. But on the other hand, it could be a time of great opportunity, a time for rebuilding a sane, sensible, and—dare I say it—sacred order. And this is especially true for those who understand how the world really works, by which I mean the Distributists.

Still, we must ask, “How shall we eat when the corporations can no longer feed us? How will we defend ourselves without great armies? How shall we trade without the vast engines of commerce?” And aside from these great questions, we all have some proper affection for the way things are, for the things we are used to, for the relationships that are familiar. We might criticize them, as I do, unceasingly, but we are used to them, and cannot avoid being attached to them.

We can see this end in the riots in the Middle East. Although the calls of the crowd are for “Democracy” and an end to the brutal dictatorships that have ruled them, the cause of these riots has been the sharp rise in bread and oil prices and the reduction of government food and fuel subsidies. The Malthusians, naturally enough, take this as “proof” that we cannot feed a planet of 7 billion people and that disaster looms on every hand. And in a way it does, but not a disaster caused by the myth of too many people and too little food. For the plain fact of the matter is that the world is awash in food; it is justice that is in short supply. 50% of the grain traded on international markets goes to ethanol and feed lots. We starve people to feed cars and cattle.

In the process, we totally corrupt the right order of things. For example, the cow is a marvelous machine for turning inedible vegetable matter into high-quality protein. But when we gather the cattle into feed lots and feed them the food meant for humans, we create high-grade poverty; it takes 20 pounds of grain protein to make one pound of meat protein; in the end, there is far less food. Out of a natural abundance, we create an artificial scarcity. But scarcity is precisely the point, because modern economics preaches that scarcity is wealth; to make a thing scarce is to make it valuable. The path to riches for a few is through poverty for the many.

Still, the Malthusians disparage Distributism as the economics of “three acres and a cow” and ask how 7 billion people can be fed by without the high technology of the modern factory farm. It’s a fair question. Here is the answer:

Such a system produces more than wealth; it produces well-being. It produces independence. It produces a totally different relationship with the natural world and with one’s neighbors. It produces a decent lunch, without the plastic wrap and chemical additives.

Of course, this is only one of many solutions to the various problems we will face. “End of the world” scenarios usually have us reduced to primitivism and barbarity. I suspect that the opposite might be true: it might lead to civility and abundance. It might lead to a new economics based on different principles, supporting a culture that really is cultured, and not just a canvas to advertise ever more pointless consumption.

It is the task of the Distributists to look around their neighborhoods and see which problems can be solved from local resources, which by trading with our nearest neighbors, and which will require wider forms of cooperation. Contrary to received wisdom, the current system cannot feed the world, or at least not the world of cars, cows, and people. The rich would just as soon have the cows and dispense with the people, and will preach that as a solution. The problems of the Middle East will not be solved by democracy, as worthwhile as that goal might be, but by providing a decent life to the people, which the current system cannot do. The problems will engulf the region—a region critical to oil supplies and hence to the current system of agriculture—and from there will engulf the world. We can show how the world can be rebuilt, and rebuilt with abundance.