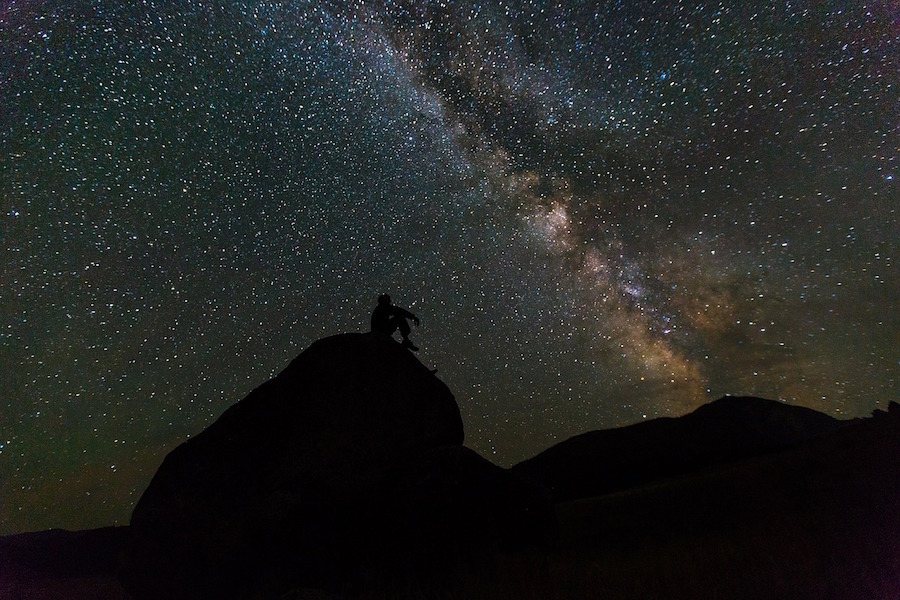 My five year old daughter told me: “Dad, I know what you call stars that draw a picture: consternations.”

I chuckled, but thought: No dear, a consternation is when you refuse to eat your dinner for no good reason.

I also overheard her explaining to her four year old sister: “The word asteroid has two meanings. It can be an object that shoots through space, or it can also mean a person who goes into space.”

She seems to have a very astronomical bent of mind. She had a great interest in “wishing stars”—our name for shooting stars. Specifically, she wondered why they fly across the sky when other stars don’t. I explained that shooting stars aren’t actually stars at all, they’re asteroids (the first, non-human kind), and the light we see as they flash across the sky is from them burning as they pass through the earth’s atmosphere. She answered: “Dad, I want to make a wish on a shooting asteroid.”

A few weeks later it was dusk when we came home from the park and there was a beautiful moon in the evening sky. We stopped to admire it, and as we looked, we saw the first star of the night. I said the rhyme: “Star light, star bright, first star I see tonight, I wish I may, I wish I might, have the wish I wish tonight.” On the spot, my daughter made her own wishing rhyme: “Asteroid, O asteroid, you look like a star, But an asteroid is what you are, I hope I get my wish tonight.”

I thought it a beautiful bit of verse, and remember that evening of gazing into the sky with my young children when I think of The Epiphany Star. So much of our world has a fullness of meaning beyond what we first perceive, beyond what we see, even beyond what it is in and of itself.

In C. S. Lewis’ Narnia book, The Voyage of the Dawn Treader, a group of children from England are transported to the magical world of Narnia where, among other adventures, they meet an old man named Ramandu who is actually a star who grew old and set, and now awaits the time when he “shall take my rising again . . . and once more tread the great dance.” One of the children says: “In our world . . . a star is huge ball of flaming gas.” Ramandu answers: “Even in your world, my son, that is not what a star is but only what it is made of.”

The Epiphany Star is one of those things with a fullness of meaning and significance beyond “only what it is made of.” There is a good movie out called The Star of Bethlehem which offers an explanation of what the star of Bethlehem might have been, based on a very interesting astronomical reconstruction of the night sky in Bethlehem at the time of Jesus birth (the movie posits that The Star may have been a particular congruence of planets and constellations).

Pope Emeritus Benedict XVI in his book Jesus of Nazareth: The Infancy Narratives, also gives a brief but intriguing summary of various explanations of the Star that have been proposed through the centuries by some of the greatest scientific minds in history (including no less a figure than Johannes Kepler), such as a supernova, constellations, or convergences of planets and supernovas. I was interested just to discover that the question has beguiled the great intellects through the millennia.

But whatever the Star was, a star or supernova or constellation or something else, The Epiphany Star was much more than whatever it was made of—more than the greatest explosion of galactic star-matter to ever rock the universe. It was the ultimate wishing star, heralding the fulfillment of the greatest hopes and longings of mankind going all the way back to the Garden of Eden: the healing of the great rupture in creation, the restoration of man after the Fall, man’s return to the grace and fellowship of God, and the regeneration of all creation restored to God’s grace and plans for the universe.

After the cataclysm of the Fall, God promised Adam and Eve that a Son would be born who would restore mankind and the universe. No wonder Adam and Eve were so full of expectancy at the birth of Cain. But Cain was not the promised son, and mankind had to wait for the promised one down through the long ages, as humanity spiraled ever deeper into darkness, until finally God sent the flood. And still after the flood mankind struggled onward in pain and death and darkness, searching, praying, waiting, hoping, watching.

Until, at last, The Star appeared.

In his magnificent and elegant book, What Color is God?, Father Corbin Eddy wrote: “Of the many ways in which we might picture glory, this feast [of the Epiphany]offers a guiding star, mysteriously enchanting the wise. What better way is there to picture openness to infinity than by gazing into the heavens?”

“Creator alme siderum,” we used to sing at Vespers during the Christmas Season. “Loving, nurturing, mothering creator of the stars.” Alme Creator, “nourishing creator,” is like the alma mater, the “nour­ishing mother” that we use to describe a school we attended.

The wise in the story [of the Magi]are those who are able to welcome the new star as a gift from Creator alme and not as a threat. These gift-bearing stargazers come mysteriously, with courage and with wisdom, to seek one greater than themselves, then disappear without a trace. They are signs of hope, signals of the unexpected, gratuitous aspects of life’s possibilities. They come from afar, and are clearly contrasted with complacent “temple dwellers” who think they already see the light . . . The wise men are looking for a new king, “for we saw his star at its rising and have come to pay him homage.”

Just as it did for the Magi of the gospel (not really so very long ago), still today The Epiphany Star calls us out of our own country, beckoning us to traverse afar with courage and wisdom to seek something greater than ourselves. In this darkened world, it reminds us that there is light. The Epiphany calls us to continue seeking for those unexpected, gratuitous aspects of life’s possibilities. The Star calls us to Hope.

Hope can be hard. Hard to grasp, harder to maintain. But From Adam and Eve to Bethlehem to our own day, the story of mankind is a story of Hope. And the Epiphany reminds us that wishes do come true. The ultimate Hope of all of man has been fulfilled. We have Christmas, we have Easter. We have Emmanuel: God is with us.

So let us continue to hope. To pray. And to work for the fulfillment of Christ’s vision for our world. The Star of the Epiphany shines in the night to remind us that hope is not in vain, and to rekindle our own courage to hope again.