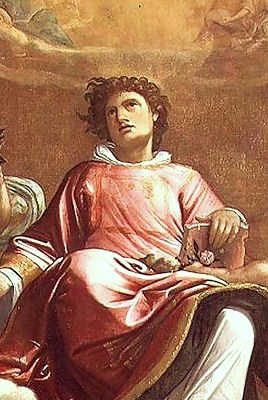 THE second festival in honor of the holy protomartyr St. Stephen was instituted by the Church on the occasion of the discovery of his precious remains. His body lay long concealed, under the ruins of an old tomb, in a place twenty miles from Jerusalem, called Caphargamala, where stood a church which was served by a venerable priest named Lucian. In the year 415, on Friday, the 3d of December, about nine o’clock at night, Lucian was sleeping in his bed in the baptistery, where he commonly lay in order to guard the sacred vessels of the church. Being half awake, he saw a tall, comely old man of a venerable aspect, who approached him, and, calling him thrice by his name, bid him go to Jerusalem and tell Bishop John to come and open the tombs in which his remains and those of certain other servants of Christ lay, that through their means God might open to many the gates of His clemency. This vision was repeated twice.

After the second time, Lucian went to Jerusalem and laid the whole affair before Bishop John, who bade him go and search for the relics, which, the Bishop concluded, would be found under a heap of small stones which lay in a field near his church. In digging up the earth here, three coffins or chests were found. Lucian sent immediately to acquaint Bishop John with this. He was then at the Council of Diospolis, and, taking along with him Eutonius, Bishop of Sebaste, and Eleutherius, Bishop of Jericho, came to the place.

Upon the opening of St. Stephen’s coffin the earth shook, and there came out of the coffin such an agreeable odor that no one remembered to have ever smelled anything like it. There was a vast multitude of people assembled in that place, among whom were many persons afflicted with divers distempers, of whom seventy-three recovered their health upon the spot. They kissed the holy relics, and then shut them up. The Bishop consented to leave a small portion of them at Caphargamala; the rest were carried in the coffin with singing of psalms and hymns, to the Church of Sion at Jerusalem. The translation was performed on the 26th of December, on which day the Church hath ever since honored the memory of St. Stephen, commemorating the discovery of his relies on the 3d of August probably on account of the dedication of some church in his honor.

Reflection.—St. Austin, speaking of the miracles of St. Stephen, addresses himself to his flock as follows: “Let us so desire to obtain temporal blessings by his intercession that we may merit, in imitating him, those which are eternal.”